More than 10,000 party faithful, most of them dressed in white, packed the Putra World Trade Centre to witness the chiefs of former rivals Umno and Parti Islam SeMalaysia (PAS) sign a "National Cooperation" charter outlining the formal terms of their pact, which has won them three by-elections as an informal arrangement over the past year.

The large crowd spilled over into nearby halls, corridors and stairwells to watch the proceedings from several screens.

"This movement offers a New Deal. This cooperation is the main option to replace a 'kakistocratic' government that has made this country a failed state," Umno president Zahid Hamidi said in his speech just before putting pen to paper.

The charter outlined the parameters of the tie-up, which stressed the primacy of Islam and the Malays, while preserving the rights of Malaysia's other minority communities such as the Chinese and Indians.

This alliance ends more than 40 years of enmity between once-dominant Umno - humbled after losing its six-decade-long grip on power last year - and perennial opposition stalwart PAS. But it has also sparked fears of racial polarisation.

PAS president Hadi Awang dismissed these fears at the event yesterday, which was also attended by representatives from non-Muslim opposition parties.

Instead, he said that the pact was merely defending the Malay community from "daring political parties and individuals who challenge the position of Islam, the special rights of Malays and the royalty". 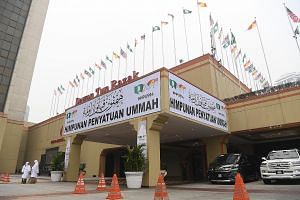 Umno and PAS to stage mammoth rally in KL on Friday

Umno, PAS to sign pact that could threaten PH at next polls

"Grow the love for your own people and save all Muslims. This is not racism, because if we were racists, other people would not be able to live with us from long ago," he said.

While the two parties may control more than two-thirds of the Malay vote, it would be nearly impossible for them to win a parliamentary majority without MPs from wards with largely non-Muslim voters.

Umno had in the past relied on partners in Sabah and Sarawak, where conservative Islam is shunned, to form a government.

Both presidents told a press conference after the signing that it was too soon to plan their strategies and seat allocation for the next general election, due to be held by 2023.

But PAS chief Hadi said there were plans to share power in the four state governments they control as "we are now family".

Umno currently leads the state government in Pahang and Perlis, while PAS administers Kelantan and Terengganu.

PH's victory in the general election in May last year was partly due to the Malay vote being split between itself, Umno and PAS.

But Umno and PAS have since teamed up to win all three by-elections this year in seats where Malays form the largest community.

This cooperation is the main option to replace a 'kakistocratic' government that has made this country a failed state.

IN DEFENCE OF COMMUNITY

This is not racism, because if we were racists, other people would not be able to live with us from long ago.

Electoral data also showed that their combined vote hauls would have won them an additional 21 parliamentary wards that had instead elected PH candidates in the national polls last year - enough to have stopped Prime Minister Mahathir Mohamad's shock return to power.

The two parties have been at the front line of allegations that PH policies are eroding Malay and Muslim rights and privileges.

Approval ratings for PH have sunk from 75 per cent when it formed the government to 41 per cent as of July this year.

Among the Malays, who form the majority in more than half of the Parliament's 222 seats, less than a third polled said they were happy with the ruling coalition.

Tun Dr Mahathir has sought to disrupt the united Umno-PAS front, pointing out deep rivalries among their party faithful, especially after Mr Hadi's 1981 decree that Umno members were infidels.