PERMATANG PAUH (Penang) • The home constituency of Malaysian opposition leader Anwar Ibrahim will see a stiff three-cornered fight in the coming elections, but residents say the Permatang Pauh seat will likely remain the stronghold of the Anwar family.

The ward, located on the mainland side of Penang and near the first Penang bridge, has been held by Anwar or his wife Wan Azizah Ismail since 1982.

Umno, Anwar's former party, has always put up a candidate to vie for the seat. But this time, Islamist party PAS, too, wants the prized constituency.

Anwar is serving his second sodomy sentence and is expected to be released on June 8. But he cannot stand as a candidate for five years after his release unless he is pardoned by the Malaysian King.

The backdrop to the looming contest in Permatang Pauh is the huge realignment in Malaysian politics in the last three years, with Parti Islam SeMalaysia (PAS) abandoning the main opposition pact and tacking closer to Umno.

Meanwhile, former prime minister Mahathir Mohamad, who sacked Anwar from government posts in 1998, is now an ally of Anwar, a move that some in Permatang Pauh are still puzzling over.

Unlike bustling Penang island, Permatang Pauh is a nondescript town with no particular landmark, comprising scattered villages and pockets of rice fields. The residents are a mix of workers in nearby industrial areas in Perai, small traders, farmers and civil servants .

"It has been a long time since Permatang Pauh has seen changes. Time has stood still here," Datuk Seri Najib said.

Umno can give me satay and Najib can give me chicken, money, but I don't want. I will eat the opposition's humble roti canai because it comes from their heart.

"The MP here does not know her role. You don't see her face," he said, referring to Dr Wan Azizah.

But local resident Mohd Rizal Che Meh, 40, said: "Umno can give me satay and Najib can give me chicken, money, but I don't want. I will eat the opposition's humble roti canai because it comes from their heart."

PAS president Abdul Hadi Awang, who visited Permatang Pauh last month, said at a political rally that the ward was won by its candidate in 1979 until his defeat by Anwar, then an Umno politician, in 1982. "I want to declare that this is PAS' constituency. We won it in 1979 and we want it back," Datuk Seri Abdul Hadi said.

PAS is hopeful of making a big dent in Permatang Pauh as the parliamentary constituency consists of three state seats - two held by PKR, and one, Permatang Pasir, by PAS. 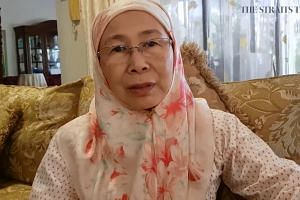 But many Permatang Pauh residents told The Straits Times recently that they will continue to back their "kampung hero" and the opposition alliance in the upcoming elections.

"I really sympathise with Anwar because he has been maligned too much and I appreciate Wan Azizah fighting for his justice all this while," said building contractor Mohd Sarizal Adnan, 45.

As driver Shabari Ibrahim, 46, put it: "There is nothing much here. It is Anwar who made Permatang Pauh famous. He may have spent years in prison, but the young people know of him and his Reformasi cause from their parents."

When Anwar went to jail for the second time, a by-election was held in Permatang Pauh in April 2015. Dr Wan Azizah won with 30,316 votes, a majority of 8,841 ballots ahead of Umno-Barisan Nasional (BN) newcomer Suhaimi Sabudin, who received 21,475 votes. Anwar won the seat in the 2013 General Election with a majority of 11,721.

Retired military man Yusuf Hassan, 61, a BN supporter of 27 years, is going to switch to the opposition because he believes the Anwar-Mahathir union is "an excellent combination for Malaysia". He said: "Mahathir and Anwar are world-class and will help to heal our economy."

Hawker Norma Ibrahim, 40, said she will vote for PAS, after years of voting for the opposition.

"I don't know if Dr Mahathir's motive is to remove PM Najib or really, to win power for himself. I feel sorry for Anwar if he gets ditched again because he is Dr Mahathir's backbone," she said. "So, I will just vote for PAS because it is clear that it supports Muslims and Malays."

Said Mr Rashaad Ali, an analyst with the S. Rajaratnam School of International Studies: "I think that when it comes down to it, those who voted for the opposition last time round will do so again, despite their misgivings. PKR supporters will probably still vote accordingly, despite the Mahathir factor".