BANGKOK • Two Chinese nationals will go on trial this week for their alleged roles in a deadly bombing at a Bangkok shrine one year ago - an attack whose motive remains clouded in mystery following a murky and, at times, surreal investigation.

The trial, which starts tomorrow, will be held at a military court in Bangkok and is expected to last more than a year.

The bombing was the worst assault of its kind in Thailand's recent history. But one year later, more than a dozen key suspects named during the investigation remain at large, while analysts say the Thai authorities have yet to offer a convincing motive.

The small but powerful bomb, packed with ball bearings, killed 20 people and wounded more than 100 when it ripped through the Erawan Shrine in the heart of Bangkok's shopping district on Aug 17 last year.

The Hindu shrine is popular among ethnic Chinese visitors, who made up a majority of the dead with five from Malaysia, five from China and two from Hong Kong. 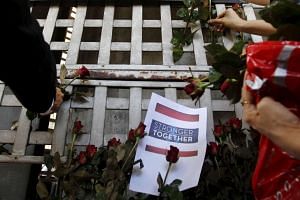 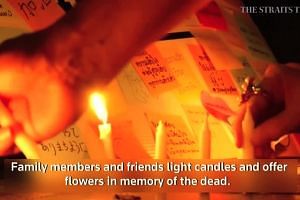 Analysts have largely coalesced around the theory that the bombing was in revenge for the Thai junta's forcible return of 109 Uighurs to China weeks earlier. 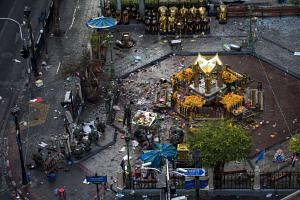 But the Thai authorities have said the two incidents are unrelated and insist the bombing was carried out by a people-smuggling gang angered by policing successes against human trafficking.

The Uighur minority say they face cultural and religious repression in their homeland of Xinjiang in north-west China, and many are believed to have fled the restive region in recent years.

The junta's deportations sparked international condemnation and violent protests outside Thailand's diplomatic missions in Turkey, which has given refuge to many of the Turkic-speaking group.

Throughout the investigation, Thai police and military officials sent out conflicting and, at times, contradictory messages.

Junta officials initially pointed the finger at domestic critics of their rule. Then, after investigators arrested the two Uighur suspects, they refused to confirm their Chinese nationality for more than a week.

The authorities have also refused to call the assault a terrorist attack despite the mass civilian casualties.

Police eventually outlined a group of around 15 suspects, including Chinese Uighur, Turkish and Thai nationals, some of whom had either fled or allegedly organised the attack out of Turkey.

But none of those people are in the dock and there has been no publicly announced attempt to seek any extraditions from Turkey.

Prosecutors accuse Mohammed of placing the bomb inside a backpack at the shrine and say Mieraili was involved in transporting the device. Both deny the charges.

In a statement released through his lawyer, Mohammed - also known as Adem Karadag - said he was an illegal migrant trying to make his way to Malaysia to find work when police raided the Bangkok flat he was staying in.