BANGKOK (AFP) - Thailand's ousted prime minister called on the kingdom's generals to return power to the people as the country marked the second anniversary Sunday (May 22) of its latest coup.

Yingluck Shinawatra, whose government was thrown out of office on 22 May 2014 in the military's 12th successful putsch, said the country was "suffering" under army rule.

Since their takeover, Thailand's military have clamped down on dissent, banning political protest and ramping up prosecutions under the country's draconian sedition and royal defamation laws.

The economy has also stagnated, debunking the junta's claims that it alone holds the key to the nation's prosperity.

"Today is the 2nd anniversary of the coup d'etat that removed my government from office," Yingluck said in a Facebook post uploaded Sunday morning.

"It was the day that the people's rights and freedom were taken away."

Yingluck was Thailand's first female prime minister and the brother of Thaksin Shinawatra, who was also toppled in a 2006 coup backed by the kingdom's royalist establishment.

They despise the clan, accusing Thaksin of poisoning the country with populist and corrupt policies. 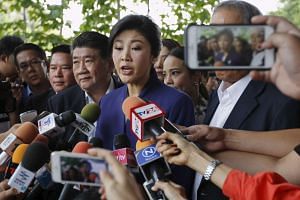 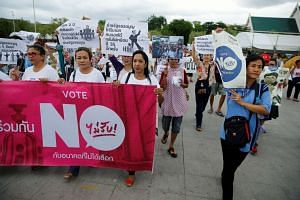 But the Shinawatras remain wildly popular among Thailand's rural and urban working class, especially in the north, who vote for the family in droves and laud them for uplifting the lot of the poor after decades of neglect by a Bangkok-based elite.

But critics say the takeover was simply the latest attempt to ensure the Shinawatras are kept from power.

In her statement, Yingluck said Thais are "suffering" as the economy dribbles along and questioned whether the junta had made good on a vow to heal the country's political divide, a period often described by Thais as "the lost decade".

She urged the junta to swiftly return "the basic rights and freedom that will allow the people to once again choose their own destiny".

Yingluck was retroactively impeached by the military following their takeover and is on trial for negligence, a charge that could see her jailed for up to 10 years.

The military have promised to hold elections in the summer of 2017, but previous election pledges have slipped.

A controversial new junta-crafted constitution will be put to a referendum in August.

Last week the military warned that any rejection of their constitution at the referendum might result in elections having to be put back further.

Analysts say Thailand's political troubles are exacerbated by the failing health of its 88-year-old monarch Bhumibol Adulyadej as competing elites jostle for power ahead of the succession.