NEW DELHI (AFP) - Indian police on Saturday arrested two more suspects in a mob murder of a Muslim man over rumours he had eaten beef, as debate mounted over communal intolerance under the Hindu nationalist government.

Mohammad Akhlaq, 50, was dragged from his house on the outskirts of the capital and beaten to death by around 100 people on Monday night over suspicions he had eaten beef - a taboo in the Hindu-majority nation.

Akhlaq's 22-year-old son was also seriously injured in the attack in Bisada village in Uttar Pradesh state and has been undergoing treatment at a nearby hospital.

"Total eight main accused (have been) arrested out of 10 named ones," A. Satish Ganesh, a senior police official for Uttar Pradesh told AFP in a text message, without giving any further details.

Police arrested six other suspects on Wednesday. The case has fuelled concerns over perceptions religious intolerance is growing under the right-wing Bharatiya Janata Party government.

Calls have grown for nationalist Prime Minister Narendra Modi to speak out on the case after colleagues in his party came under fire for appearing to trivialise the crime. 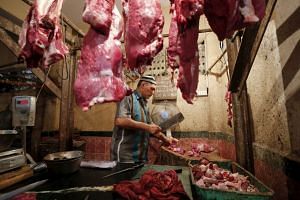 Mob kills man, 50, in India after rumours swirl that his family stored, consumed beef at home

"If somebody says it was pre-planned, I don't agree. It was an accident and investigations should happen," junior culture minister Mahesh Sharma told reporters during a visit to the victim's family on Friday.

Hostile villagers attacked a media crew on Saturday, pelting stones and shattering their car windows. Rumours that the family had eaten beef began when a calf was reported missing in Dadri village, 35 kilometres (22 miles) from New Delhi.

Soon after a nearby temple made an announcement via loudspeaker that the family had consumed beef and within minutes the mob kicked down Akhlaq's door and tore through his home before killing him.

The victim's family has maintained they had mutton in the fridge and not beef. Killing cows is banned in many states of India, where the majority of the population is Hindu but which is also home to sizeable Muslim, Christian and Buddhist minorities.

In March, the state of Maharashtra toughened its ban to make even possessing beef illegal, a move seen by religious minorities as a sign of the growing power of hardline Hindus since Modi came to power last year.