At least two people, including an infant, were reported to have died as a result of the worsening haze situation in South Sumatra, prompting five non-governmental organisations to accuse the government of committing a serious breach of human rights by failing to control the fires in Sumatra and Kalimantan.

A four-month-old baby girl, whose parents are farmers living in Talang Bulu village in Banyuasin regency, in South Sumatra, died on Sunday at the Ar-Rasyid hos-pital in the provincial capital of Palembang, news website Kompas.com reported.

The infant girl had severe respiratory problems before she was rushed to the Palembang hos-pital, about 11/2 hours' drive from her home.

Another news website, Republika.co.id, reported that a 59-year-old man from Pekanbaru was found dead on Aug 25. He was found sitting against a tree in thick smog in his plantation.

The five NGOs include prominent environment watchdog Indonesian Forum for the Environment, the Indonesian Legal Aid Institute and the Commission for Missing Persons and Victims of Violence (Kontras).

The NGOs told a media briefing yesterday that they had also received reports that several pregnant women in the remote village of Hanjak Maju in Central Kalimantan's Pulang Pisau regency also faced difficulties when they tried to evacuate to a safer place.

Kontras coordinator Yati Andriani told reporters: "So many basic rights have been breached - rights to have access to clean air, health, mobility without restraint and education.

"This is not just about the haze blocking visibility."

The NGOs demanded that President Joko Widodo's government disclose a full list of companies and their concessions where plantation fires were spotted to promote transparent accountability, and to provide an ample emergency response to residents affected by the choking haze. 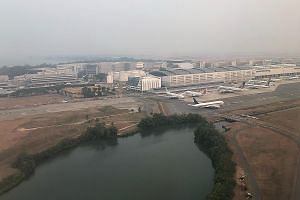 Haze in Singapore at mercy of wind direction

Mr Joko, who is popularly known as Jokowi, visited Pekanbaru in Riau province yesterday to check on the impact of the haze. He also held a coordination meeting to discuss how to better tackle the situation.

He ordered his ministers and relevant officials to not let the current condition worsen.

Mr Joko said in the meeting: "However small a fire is, quickly put it out. We have a network of officials all the way down to the village level. Whenever a fire emerged, we should have detected it."

National police chief Tito Karnavian, who took a helicopter ride over Pelalawan regency in Riau province on Sunday, said it was apparent that the fires were deliberately started.

He noted that only forested areas were burning and those containing oil palm plantations and other cultivation such as pulp wood trees remained intact.

"This indicates the burning was intended," General Tito was quoted as saying in a statement issued by disaster management agency BNPB.

The statement yesterday cited a report by the Pelalawan regent that 80 per cent of burnt forested areas were usually converted into oil palm plantations and other crops.

The haze has spread to Malaysia and Singapore, renewing fears of a repeat of the 2015 crisis.