PHNOM PENH • The worsening trade war between the United States and China has intensified pressure on companies to leave China and set up factories in places such as Cambodia, a verdant country of 16 million people with low wages and high hopes.

But anyone who moves here may have to deal with the water buffalo sometimes found meandering across the Khmer-American Friendship Highway linking Phnom Penh's factories with the port in the city of Sihanoukville.

And they are not the only potential obstacles. Factory workers heading home on foot and motorbikes clog the road too. For factory owners on deadline, those crowded roads can mean frustrating delays.

"Where Cambodia sits now is where China was 25 years ago," said Mr Piet Holten. To get his sports goods from his Phnom Penh factory to market, he flies them using DHL.

US President Donald Trump's tariffs on Chinese products, which expanded to an extra US$200 billion (S$273 billion) worth of goods on Monday, are prompting many firms to rethink their supply chains. As tariffs begin to make China look more expensive, many are considering cheaper places such as Vietnam and Cambodia to make their goods.

Already, firms with significant US business, such as fashion brand Steve Madden and German sports brand Puma, have said they will look to move production out of China. But China will be hard to quit. From jacket zippers to minerals used in iPhones, China makes or processes many components that go into consumer goods. It has a dependable source of workers, as well as reliable roads and rail lines connecting suppliers to assembly plants and ports

China remains an efficient place to do business.

Countries such as Cambodia and Vietnam lack China's vast supplier base and dependable roads. Many firms have to start from scratch.

"When I came here in the beginning, it was a nightmare," said Mr Elli Bobrovizki, who runs a factory in Phnom Penh that makes Bloch ballet shoes. Getting the ballet slippers and jazz shoes out to places like the US takes at least a day or two longer than it would in China. To reach his factory, a visitor has to travel down a bumpy dirt road. Inside, hundreds of workers cut leather from Brazil, then glue, pinch, gather and hammer it into soles.

One day a few years ago, Mr Bobrovizki arrived at his factory to find that several unions had locked it. Negotiations took weeks. "I lost half a million dollars in those two weeks that they blocked my gate."

Companies are not looking to leave China just because of the trade war. Average wages have risen by about one-third in recent years, according to official data. The average Chinese factory worker makes about US$10,000 a year. The minimum wage for Cambodian garment workers amounts to about one-fifth of that. But rising tariffs, and the prospect of more on the horizon, add to the urgency. 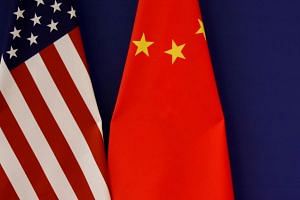 Still, China remains an efficient place to do business. Over the past three decades, the country has built 4.7 million km of highways. It has 13 of the world's 50 largest ports, and three of the top five. China's sheer manufacturing capabilities are unrivalled. One measure of its output, called manufacturing value-added, shows China makes roughly as much as the US and Japan combined.

"The entire supply chain is based in China, so if we were to move, we would still have to procure components in China, and then export them somewhere else," said Mr Aaron Emigh, co-founder of Brilliant, a US start-up that makes smart home devices. "Moving out of China is not purely a matter of cost, but of possibility."

A version of this article appeared in the print edition of The Straits Times on September 26, 2018, with the headline 'Trump's tariffs may hurt but it's hard for firms to quit China'. Subscribe
Topics:
More
Whatsapp Linkedin FB Messenger Telegram Reddit WeChat Pinterest Print Copy permalink