MANILA (REUTERS) - Tough-talking mayor Rodrigo Duterte has kept his double-digit lead five days before the Philippine presidential elections, despite allegations he had undeclared millions of pesos in a bank, the latest opinion poll has showed.

Duterte was the number one choice among 33 per cent of Filipinos in the Pulse Asia survey done on April 26-29, the same numbers from a similar survey among 4,000 respondents a week earlier, the poll released late on Tuesday showed.

Manuel Roxas, President Benigno Aquino's hand-picked successor, moved up a spot into second place for the first time since June 2015 after rising 2 points to 22 per cent support.

Senator Grace Poe, the adopted daughter of movie stars, fell back to third after dropping a point to 21 per cent. 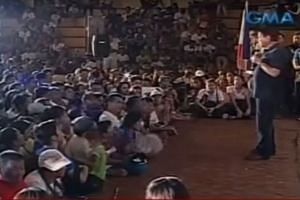 Vice-President Jejomar Binay was in fourth place with 17 per cent after losing a point, while support for Senator Miriam Santiago was unchanged at 2 per cent.

The maverick mayor of the southern city of Davao is also leading the "Gulp Poll" conducted by convenience store chain 7-Eleven, which has asked customers at their 1,650 outlets across the country to pick soda cups with images of their favourite presidential candidate.

The popularity of Duterte's blue cup has mirrored two opinion polls last week that put the 71-year-old between seven and 12 percentage points in front of his nearest rival, Grace Poe, ahead of the May 9 national vote.

"I picked Duterte because I want a change in society, and I see how well-received he is when he campaigns in other areas," said government employee Michael John Aguillon.

The store's poll, first won by President Benigno Aquino in 2010, has "undecided" cups in second with those of Roxas, Binay, Poe and Santiago all trailing.

The convenience store is not the only ones to mix politics with the palate.  In downtown Manila, customers at Kamuning Bakery can pick a set of stuffed pandesal, a Filipino bread roll, named after a particular candidate.  Duterte’s spicy pork sandwich was leading the race, bakery staff said.

"I saw most of the customers ordering 'Pan de Duterte' because they like the mayor of Davao, and the second most popular ever since we started was Senator Grace Poe," Kamuning bakery owner Wilson Lee Flores said.

Political analysts said Duterte had struck a chord with most Filipinos who were frustrated and disappointed with the government's inability to address mass transport and traffic problems in the capital, Manila.

His strong anti-crime platform also resonated among voters across all economic classes and in all geographical regions.

However, Holmes noted a dip in Duterte's support in Manila over allegations he had not declared 211 million pesos (S$6.07 million) in his bank account.

The allegations about the undeclared money were made last week by Senator Antonio Trillanes, a candidate for vice president. Peter Lavina, a spokesman for Duterte, said the allegations were "nothing but a publicity stunt".

The poll follows a tricky week for Duterte, who has also been trying to manage the fallout from controversial remarks he made at a campaign rally about an Australian missionary murdered and raped during a 1989 prison riot.

About 54 million Filipinos, including overseas workers, are eligible to vote in Monday's elections.