and Arlina Arshad Oil palm from illegal plantations in protected forest areas in Sumatra has tainted the supply chains of some of the world's top palm oil firms that sell to makers of everyday items, from soap and shampoo to ice cream, an investigation has found.

The study by Eyes on the Forest (EoF), a coalition of Indonesian non-governmental organisations, underscores the complexity of tracing all sources of palm oil. 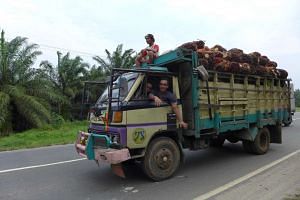 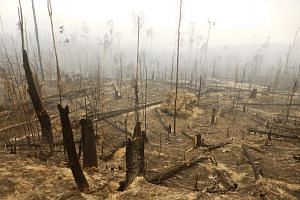 "The report shows that corporate zero-deforestation commitments did not stop illegal deforestation for oil palm," said Mr Made Ali, deputy coordinator of Jikalahari, an EoF partner.

Companies need to understand that their suppliers have knowingly been feeding illegal product into the global supply.

MR MADE ALI, deputy coordinator of Jikalahari, on illegal palm oil from Sumatra.

"Companies need to understand that their suppliers have knowingly been feeding illegal product into the global supply and it is time to focus all efforts on tracking supplies to the plantation base," he told The Straits Times in an e-mail.

The palm oil companies investigated are among the most influential in the industry. In recent years, all have made far-reaching commitments to sustainability, including traceability of palm oil supplies, though full traceability to the plantation level is a major challenge.

Illegal plantations have been a problem for years. The five conservation areas, including Tesso Nilo National Park, total 263,150ha, or nearly four times the size of Singapore. But in recent years, the areas have been progressively deforested. By the end of last year, 81 per cent had been cleared. Oil palms now grow where forests once stood.

Using hot-spot maps and satellite imagery, EoF also found a strong correlation between fires and the establishment of illegal plantations.

"Our team is collecting all the information regarding all these kinds of illegal activities, not only within these areas (mentioned in the report) but... other areas," Mr Rasio Ridho Sani, the director-general of law enforcement for the Ministry of Environment and Forestry, told The Straits Times.

It found that GAR, Wilmar and RGE bought tainted palm fruit or CPO from some of these mills. EoF presented its findings to the companies before publication this month.

In an e-mail to The Straits Times, GAR said it was concerned about the findings, saying they were counter to its sustainability principles, which apply to its subsidiaries. The company has been engaging with three supplier mills named in the report to seek further clarification.

Asian Agri said it took swift action once it received the report.

"We terminated contracts with the said suppliers in June 2015," Mr Freddy Widjaya, director of Asian Agri, said in an e-mail reply.

Musim Mas said it took grievances raised in the report seriously and has already contacted the 14 tainted mills listed in the report as suppliers and will investigate further.

Wilmar did not respond to queries but the company has a programme to map supplies to the plantation level. It said in a recent report on its website that there was "a low level of willingness from many mills to share any information on their FFB (palm fruit) suppliers".