BANGKOK (REUTERS) - Standing atop the stairs outside his university auditorium, 20-year-old activist Parit Chiwarak led a protest of hundreds of people calling for an end to Thailand's ruling military junta.

"The military is supposed to protect the country, not fight the people," he called out to students gathered this month at Thammasat, one of Thailand's most prestigious universities.

"We want elections," they chanted, many of them waving fans emblazoned with hearts reading "Love Democracy".

Thailand is scheduled to hold elections within two months, its first polls since the army seized power in a 2014 coup.

The March 24 vote could be swayed by young people, many of them newly politicised and active in a way that has rarely been seen since state forces crushed student pro-democracy movements in the 1970s. Voters aged 18-35 now make up just over a quarter of the electorate of about 50 million.

Of those, seven million are eligible to vote for the first time.

While it is not clear which way youngsters will vote, many say they do not favour the junta and the military-backed parties that have been formed to contest the election.

Young Thais for years have been seen as politically apathetic. Many say they were turned off by years of paralysing street protests by Thailand's two rival factions, the "Red Shirt" loyalists of exiled former prime minister Thaksin Shinawatra and establishment "Yellow Shirt" pro-military royalist groups.

But nearly five years of direct military rule has led to a small, but determined movement of young people calling for change.

"Young people today are not like before. We're more politically engaged, and we're a large voter base," said Netiwit Chotiphatphaisal, a 22-year-old student activist.

"This is an all-important election for us. It's more than a transition of politicians, but a testimony whether we accept dictatorship, a life-and-death moment for our future."

A December poll by King Prajadhipok's Institute found that 90 per cent of young voters aged 18 to 24 surveyed said they would vote in the next election, a departure from conventional wisdom that Thai youth are apathetic where politics is concerned.

That compares to only 37.9 per cent of Thais aged 15 to 25 who said they were "quite interested or very interested" in politics ahead of Thailand's last election in 2010 .

Most of the student activism has focused mainly on calling for elections, and has not translated into support for any party.

One new political party is making direct appeals to the youth vote part of its platform. The Future Forward party, led by the charismatic heir to an auto-parts manufacturing empire, promises a new kind of politics that weakens the military and moves beyond the red-versus-yellow conflicts. 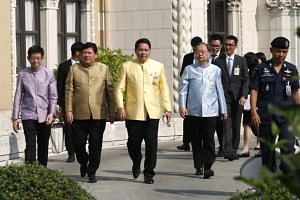 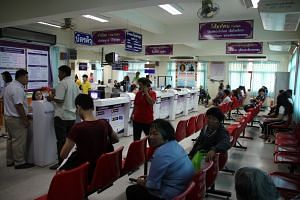 "The young people grew up in a highly divisive society. They don't see this as the new normal; they seek a way out. They seek change," said party leader Thanathorn Juangroongruangkit, who at 40 is at least a decade younger than other major parties' likely prime ministerial candidates, all in their 50s and 60s.

Also making appeals to youth are two of the biggest established parties, roughly associated with the "Red Shirt" and "Yellow Shirt" rival camps that have taken to the streets in the past decade.

For the Pheu Thai party, which has won every election since 2001 and is linked to the red shirts, there are rampant social media memes of its possible prime ministerial candidate, Chatchart Sittiphan. He is portrayed as The Hulk, among other pop culture references.

The rival Democrat party, whose opposition to Thaksin gained some support from the yellow shirt movement, also heavily promotes its "New Dem" wing of young politicians including the party leader's 26-year-old nephew, Parit Wacharasindhu, who promised to bring more youth agendas to government.

Even junta leader Prayut Chan-o-cha has a few youthful fans - though they are harder to find.

In recent decades, youth activism in Thailand has been muted, haunted by the violent crackdown on student uprisings in the 1970s.

On Oct 6, 1976, state forces and royalist mobs attacked a group of about 2,000 students inside Thammasat University and killed dozens, accusing them of sympathising with left-leaning revolutions sweeping through the region at the time.

Now, several youth activists have taken to calling the junta a "dictatorship". Small protests are held and satirical cartoons targeting the military have appeared on social media and as street art.

Last year, a music group called Rap Against Dictatorship released a song that notched up about 54 million views on YouTube, with lyrics calling Thailand "a country where the Parliament is the military's living room". Social media-savvy youth also took their frustration to Twitter in January with a hashtag translated roughly as "not another damn delay", when the junta said a Feb 24 election date would be postponed again.

"I have seen a lot of changes in the youths over the past year, like with the rap song and the hashtag, which indicate how much they value their rights and liberties," said Anusorn, the Thammasat lecturer.

"When the polls roll around, the young and especially the new voters will turn up in high numbers."