The operation on Friday (Jan 6) and Saturday saw 5,710 foreign vehicles checked, with 3,000 Singaporean motorists settling 3,275 summons, according to the Malay Mail Online. The offences were mainly speeding.

They have to pay on the spot or their vehicles would be confiscated, and returned only after they paid up.

Bukit Aman traffic police investigation and enforcement (operation) officer DSP Bakri Zainal Abidin said Singaporeans were responsible for most of the 275,663 unpaid summons, ahead of motorists from Indonesia, Brunei, and Thailand. 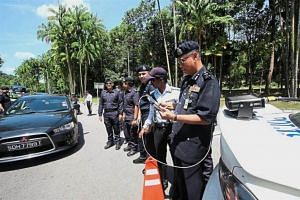 DSP Bakri told the Malay Mail Online that some motorists test drive their cars on the four-lane highways after getting them tuned up, while others go on "adventure rides" in cars such as Lamborghini and Ferrari that sometimes result in accidents.

"Their mentality against Malaysian traffic regulations must change as we are determined to keep roads safe," he said.

He added that this is an ongoing effort and no one can escape. Traffic offenders can pay their fines through government portals www.myeg.com.my and www.rilek.com.my.