JAKARTA - President Joko Widodo on Friday (Dec 2) thanked more than 200,000 protesters for a peaceful rally at the National Monument (Monas) and urged them all to return home safely.

Mr Joko, who was addressing the crowd after joining them for mass Friday prayers held as part of the rally against Jakarta Governor Basuki Tjahaja Purnama over blasphemy, acknowledged the protesters for obeying the law and maintaining order during the event.

"Allahu Akbar, I want to recognise the people here for following the law, which allowed this (rally) to go well," said the president, better known as Jokowi.

"So once again, thank you and each of you please return to wherever you have come from." "Allahu Akbar" is an Islamic phrase that means "God is the greatest".

More than 200,000 Muslims were estimated to have gathered at the iconic Monas park in Central Jakarta to take part in the protest against Mr Basuki for insulting Islam. Many were heard chanting "Arrest that Ahok", referring to Mr Basuki's nickname.

The massive crowd attending the rally, organised by the National Fatwa Guardians of the Indonesian Ulema Council (GNPF-MUI) and led by the Islamic Defenders Front (FPI), also spilled out onto the streets.  That led to traffic on many trunk roads in downtown Jakarta coming to a standstill from as early as 6am local time (7am Singapore time). 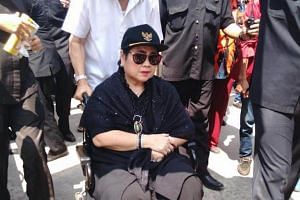 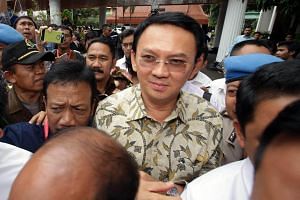 The gridlock continued as the crowds dispersed from Monas and moved to train stations and bus stops, as well as other gathering points where coaches waited to take them back to their home towns.

The police and armed forces deployed more than 20,000 personnel in the capital over fears that the rally might escalate into a riot.

News also broke during the rally that the police had arrested 10 suspects for dissident activities and charged eight of them with treason.

Police spokesman Colonel Rikwanto did not name the suspects but identified nine of them by the initials AD, E, AD, KZ, FH, RA, JA, RK and SB.

One of those arrested was Ms Rachmawati Soekarnoputri, daughter of the country’s first president Soekarno, according to her lawyer.

“Yes, she has been arrested. Police officers arrived at her home at 5am and took her at 6am,” kompas.com quoted Mr Aldwin Rahardian as saying. He said he was accompanying his client, who was being questioned at the National Police Mobile Brigade headquarters in Kelapa Dua, Depok, West Java.

Mr Alwin also reportedly said he saw musician Ahmad Dhani being questioned at the headquarters. The latter was reportedly arrested along with other activists, including Ratna Sarumpaet and Sri Bintang Pamungkas, at a hotel in Central Jakarta on Thursday night.

The rally against Mr Basuki has thrust issues of race and religion to the forefront of the upcoming gubernatorial election, turning it into a test of religious tolerance in Indonesia.

Mr Basuki, more popularly known as Ahok, is in a three-way fight in February's gubernatorial election in Jakarta. Initially a hot favourite, he has seen his popularity dip after a video clip of him talking to a group of constituents in September was posted online. In the video, he allegedly told them not to be misled by his opponents, who cited a verse in the Quran to urge Muslims not to vote for a non-Muslim.

The Attorney-General's Office (AGO) on Thursday filed blasphemy charges against the 50-year-old politician in the North Jakarta District Court. This means Mr Basuki will have to answer to the allegations in court and if found guilty, may face up to five years in jail.