KUALA LUMPUR (AFP) - A third Turkish national has been arrested in Malaysia, his lawyer said on Friday (May 5), after two others were taken into custody this week on suspicion of funding the Islamic State in Iraq and Syria (ISIS) militant group.

Turkish academic Ismet Ozcelik was arrested on Thursday, his lawyer Rosli Dahlan told AFP, adding that no official reasons were provided by authorities.

Local media reported national police chief Khalid Abu Bakar as saying the Turk was arrested because he posed a threat to national security.

No further details were given.

Ismet was initially arrested in December for allegedly assaulting an immigration official but freed on bail in January. 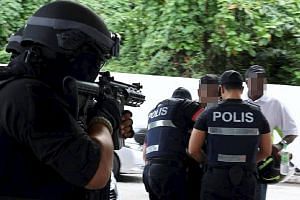 On Tuesday, two Turkish nationals Turgay Karaman and Ihsan Aslan were arrested under the Security Offences (Special Measures) Act, which allows police to detain them for 28 days, in a move that raised concerns about Malaysia acting on possible pressure from Ankara.

Turkey's state-run news agency has said the pair were linked to a US-based preacher accused of organising a failed coup last year.

But Malaysia's deputy prime minister Ahmad Zahid Hamidi said on Thursday that the country's anti-terrorism police unit had been investigating the two men, along with a number of others, for "spreading, influencing and funding" ISIS activities.

Turkish President Tayyip Erdogan's government has detained or sacked tens of thousands of people under a state of emergency imposed after last year's failed coup.

The crackdown focuses on alleged supporters of preacher Fethullah Gulen, blamed for the failed putsch.

"The Malaysian government has an obligation... to explain what is going on," he told AFP.

Police chief Khalid denied claims that the authorities were acting on Turkey's request.

"We have our own laws to protect national security. We have the right to determine who we want to arrest and detain," he was quoted as saying in the Malay Mail Online.

"Anyone who threatens our national security is not welcomed here."