MANILA (NYTIMES) - The Philippines' defence minister said on Tuesday (March 5) that the government should review a decades-old treaty with the United States, its long-time ally, to avoid provoking a potential armed conflict with China in the disputed South China Sea.

The security environment in the region has become "much more complex" since the countries' Mutual Defence Treaty was drawn up 68 years ago, said Defence Secretary Delfin Lorenzana.

"The Philippines is not in a conflict with anyone and will not be at war with anyone in the future," Mr Lorenzana said.

Since President Donald Trump took office, the US has been conducting more frequent military patrols in disputed waters of the South China Sea, in an effort to counter China's conversion of contested islands into military bases.

Mr Lorenzana said that "the United States, with the increased and frequent passage of its naval vessels in the West Philippine Sea, is more likely to be involved in a shooting war", using the Philippine name for the disputed sea region.

Because of the treaty, he said, "the Philippines will be automatically involved" in any such conflict.

His statement comes just days after visiting US Secretary of State Mike Pompeo personally assured President Rodrigo Duterte of Washington's support for the Philippines in the South China Sea. 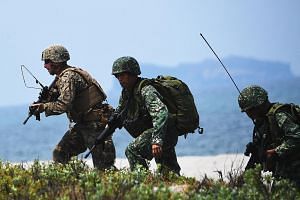 US will defend Philippines in South China Sea: Pompeo

Fallout from Philippines' pivot to China

In a meeting with his Philippine counterpart last Friday, Mr Pompeo said the US had an unwavering commitment to keeping the South China Sea open for navigation amid the Chinese build-up.

"As the South China Sea is part of the Pacific, any armed attack on Philippine forces, aircraft or public vessels in the (South China Sea) would trigger mutual defence obligations (under the treaty)," Mr Pompeo said.

The firm statement was supposed to assuage Philippine fears about Chinese assertiveness in the South China Sea, where Beijing has territorial conflicts with several governments in the region.

But Mr Lorenzana, a retired military general, questioned the US' commitment to the Philippines and warned of unintended consequences.

In 1992, the US military pulled out of the country after the Philippine Senate voted to end lease agreements for two US bases on Philippine soil. Soon after, Mr Lorenzana said, the Chinese began encroaching on territory well within what international law now considers Philippine waters.

"The US did not stop it," Mr Lorenzana said of the Chinese annexation of Mischief Reef, just 210km west of the western Philippine island of Palawan. Initially, Beijing announced that it was building shelters on stilts there for fishermen. But now, Mischief Reef includes military facilities and a runway, according to US military intelligence.

"It is not the lack of reassurance that worries me," Mr Lorenzana said. "It is being involved in a war that we do not seek and do not want."

Foreign Secretary Teodoro Locsin was more receptive to Mr Pompeo's message, saying that Manila would take the word of its staunchest ally. He said Mr Pompeo had reassured the Philippines that "we have your back".

Mr Jay Batongbacal, director of the Institute for Maritime Affairs and Law of the Sea at the University of the Philippines, said that while Mr Lorenzana had raised valid concerns, the mutual defence treaty would not automatically pull the Philippines into a conflict between the US and China.

Any decision to join such a conflict would have to be in compliance with the Philippine Constitution, even if the treaty seemed to require it, Mr Batongbacal said in an interview.

"If the Philippines does not want to be involved in a war, it can opt out on that basis," he said. "I think the issue of automatic involvement is often overstated and misunderstood."

He also said that a review of the treaty, as called for by Mr Lorenzana, would be "basically an assessment" and would not necessarily lead to amendments or revisions.

Mr Duterte has adopted a conciliatory approach to China since taking office in 2016, a marked change in Philippine foreign policy. The previous government had lodged a case against China before an international arbitral court, winning a ruling that dismissed Beijing's vast claims in the South China Sea.

But Mr Duterte has said that confronting Beijing with the court ruling would mean a war with China that the Philippines would not win.

On Monday, dozens of anti-China protesters demonstrated outside the Chinese Embassy in Manila to denounce what they say is mounting harassment of Filipino fishermen in the South China Sea.

They said that dozens of Chinese vessels had blocked passage to three sandbars that are traditional fishing grounds near an island controlled by the Philippines that China also claims. Close to 50 Chinese ships were seen anchored off the sandbars, according to the government.

The government said it was investigating and would lodge a complaint with Beijing if the assertions were proven true.

Mr Batongbacal said that such a move by China would be a strategy to prevent Filipino vessels from landing in the disputed area. The tactic involves the use of Chinese civilian fishing vessels to swarm an area and discourage other boats from approaching, he said.