With less than two weeks to go before Thailand's general election, the country's oldest political party, founded in 1946, has faced up to an uncomfortable realisation: Young, first-time voters are writing it off.

The Democrat Party, a runner-up in the 2011 election, is targeting older voters instead to reach its goal of becoming the biggest party in Parliament, secretary-general Chuti Krairiksh told The Straits Times in an interview.

Major political parties contesting the March 24 election have fallen broadly into two camps: those opposed to any extension of power for the five-year-old military government, and those likely to support a return of former army chief and now Prime Minister Prayut Chan-o-cha after the election.

But the Democrats have pitched their party as a "third alternative" between military dictatorship and what they call corrupt politicians.

This has led to speculation that the party may eventually join a governing coalition backing Mr Prayut.

On Sunday, however, Democrat Party leader Abhisit Vejjajiva stated unequivocally that he would not support the return of Mr Prayut, who staged the 2014 military coup.

In the 2011 polls, the Democrats won 159 out of 500 possible Lower House seats, largely from the central and southern regions. 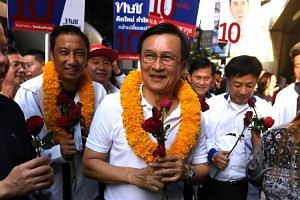 For this election, their pro-welfare pledges include one to give families of newborn babies 1,000 baht (S$43) a month until the child reaches eight years of age.

Yet Mr Chuti readily admitted that its policies have gained little traction, especially in the poorer north-east where the Democrats have traditionally fared badly.

The populous bloc, which holds the biggest chunk of constituency seats, is a stronghold of the Pheu Thai party, which headed the government ousted in the 2014 coup.

"Every party lacks the 'penetration'. If you ask a voter what's the dominant policy of Pheu Thai, of the Democrats, nobody can answer," he said. "If I ask 'who are you going to vote for in the north-east', they say 'Pheu Thai'. Why? They say 'I've always voted like this'. It's not from policy."

The Democrats lost 21 of their strongest candidates to other parties just before this election, noted Mr Chuti. He alleged that the same parties are offering voters up to 500 baht each to secure a win.

Meanwhile, the Democrat Party is one of a few to field the maximum possible number of candidates.

Pheu Thai, which splintered into several parties to try and win more seats under the new electoral system, is grappling with the loss of its sister party Thai Raksa Chart, which was dissolved by a court last week for nominating the King's sister as a prime ministerial candidate.

This has given the Democrats an opening. "We plan to be the single biggest party after the election," said Mr Chuti.

As for the north-east, he said: "We have been failing in this region for almost 25 years. I think we need a rethink... a fresh initiative."

Separately, voters coming of age this year - they form over 10 per cent of eligible voters - are also proving difficult for the Democrats to win over.

"They are just simply not interested in us... We are perceived to be an old party," he said.

"Their attitude is like, they want to change a new phone every year. So they think they can change politicians at every election as well. And they have no historical perspective of candidates and political parties."

This is something that he is trying to change. The party, he revealed, is grooming about 40 potential candidates who are too young to run in this election.

They will be ready for contest in two to three years' time, he said.