Surrounded by thousands of supporters chanting "Pracharath! Government!" at Palang Pracharath Party's final rally before the election, party leader Uttama Savanayana declared: "Lung Tu is not a choice. He is the only way for us."

Thais go to the polls today largely expecting Prime Minister Prayut Chan-o-cha, whose nickname is Lung Tu, or Uncle Tu, to come back as premier. Beyond that, however, all bets are off. The permutations of power are numerous, say analysts, and the prospects for long-term stability not so clear.

The former coup leader and retired army chief has many things working in his favour. A 250-seat Senate mostly handpicked by the ruling junta guarantees him the backing of one-third of the future Parliament. A new, more proportional election system limits the number of seats that large political parties can win. State agencies have cleared the path for his transition from military chief to politician, even as other high-profile opponents seem to be burdened with some legal infraction of sorts.

However, if the Palang Pracha-rath, the new, pro-military party that has nominated him for premier, does not win enough seats in the 500-member Lower House, it could mire the country in prolonged coalition negotiations. Mr Prayut may end up heading a minority government and facing the prospect of frequent deadlock.

"This could take the form of Election Commission decisions to invalidate Pheu Thai wins in constituencies, ban their candidates from politics and conduct revotes," he wrote in a recent note. "Even if the military accepts the reality of a Pheu Thai-led winning coalition, it would be tempted to delay the formation of a new government." 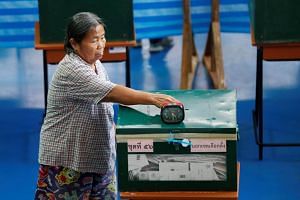 Pheu Thai is linked to self-exiled former prime minister Thaksin Shinawatra, a bedevilled figure among royalist military factions who commands the loyalty of many upcountry voters even though he has been living abroad since 2008.

Since the 2014 coup that ousted the Pheu Thai government, much effort has gone into creating a legal environment that would thwart its comeback. One can see its effects clearly during campaigning.

Despite the searing summer heat, some Pheu Thai candidates were afraid to distribute even drinking water at their open-air village rallies for fear of being accused of trying to bribe voters.

Yet the election still managed to spin a few surprises.

It earned a swift and stiff rebuke from the monarch, and a court order to dissolve the entire party.

This setback for Pheu Thai gave a tailwind to the youthful, progressive Future Forward Party, which has taken a strident stance against military influence from day one.

Pundits speculate that the two parties might strike a pact. Attempts by the now defunct Thai Raksa Chart to channel its supporters to like-minded parties like Future Forward were met by an immediate probe by the Election Commission.

Yet, on its own, Future Forward climbed up in opinion polls, surprising even sceptics who thought its appeal to young social-media-savvy voters had little resonance among the grassroots.

That message has gone down well in this election with many first-time voters, whose numbers have ballooned to some seven million because the last election was held in 2011.

Untainted by the bitter experiences that have entrenched earlier generations in Thailand's deep political divide, the young voters are seeking new perspectives.

"This discourse of 'loving Thaksin' or 'hating Thaksin' does not affect them," Dr Stithorn tells The Sunday Times. "They are open to any ideology or person, if the party can impress them."

As a result, Future Forward has emerged as a potential kingmaker alongside the older and more established Democrat and Bhumjaithai parties. 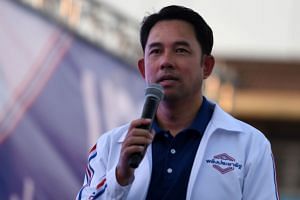 Thais are clearly eager to vote. On March 17, more than two million voters endured snaking jams and stifling queues to cast an early vote for this election, raising expectations that the turnout today will hit a new high.

Yesterday, as the clock wound down to the official end of campaigning at 6pm, political parties hit the streets of Bangkok in convoys making a last-ditch call for support. Democrat leader Abhisit Vejjajiva emerged from a Starbucks cafe in Siam Square and was accosted by hordes of fans seeking selfies.

Elsewhere, in the remote corners of Thailand, ballot papers were sent to voting centres by helicopter.

Some candidates have resorted to lavish promises involving a minimum wage and agricultural aid.

Chulalongkorn University political scientist Viengrat Nethipo contends that many voters have, by now, tuned these pledges out in search of something more fundamental.

"The status of this election is different. A lot of people are really voting to change society. Policy is not their top priority as they want to topple the military regime," she says. "This would not have been the case had it been a free and fair election."