The new Thai government is lining up a $14 billion stimulus package to boost the sluggish economy.

Thailand's four million rice-farming households will each receive 500 baht to 800 baht per 1,600 sq m of farmland in the light of a drought considered to be the worst in a decade, while loans of up to 500,000 baht will be available to farmers without interest in the first year, Dr Savanayana said yesterday.

The entire package is worth 316 billion baht.

Thailand's economy has grown at its slowest pace in four years largely due to the United States-China trade war and the strength of the Thai baht. The Thai currency has jumped by nearly 8 per cent against the US dollar over the past 12 months.

The decline has seen the official growth forecast for the year cut from 3.6 per cent to 3.3 per cent.

Exports, making up 68 per cent of the GDP, are bearing the brunt of the trade dispute between China and the US. Overall shipments declined 2.15 per cent year on year in June, while exports to China, Thailand's biggest trading partner, plunged 14.9 per cent.

The strong baht and the weak yuan, which is at an 11-year low, affected not only Thai exports to China, but also the tourism industry, which makes up about 20 per cent of GDP.

The number of Chinese tourists, the biggest group of visitors to Thailand, dropped 8.89 per cent in the first quarter of this year, compared with the same period last year.

The government has proposed 15-day visa exemptions to visitors from China and India between November this year and October next year, pending a Cabinet decision expected this month.

The Bank of Thailand cut its benchmark interest rate on Wednesday for the first time in four years by a quarter percentage point to 1.5 per cent.

At least four commercial banks followed suit by cutting up to 25 basis points on Thursday.

"The stimulus measure should at least help pull the GDP growth back up to 3 per cent, not more," economist Somchai Pakapaswiwat told The Straits Times.

"But this is merely a painkiller, not the actual remedy to the problem. It is only a short-term measure. There is much more to be done."

Dr Pakapaswiwat pointed to long-term measures such as investments in infrastructure and human capital by improving the education system as the best ways to increase Thailand's competitiveness. 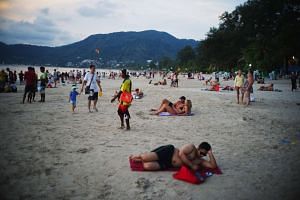 Other countries are also introducing stimulus measures to boost their economies. China will roll out a plan to boost disposable income this year and next year to spur consumption as the economy slows, Reuters reported.

Data this week showed that its economy stumbled more sharply than expected last month, with retail sales pointing to growing consumer caution, as the intensifying US-China trade war took a heavier toll on businesses and consumers.