BANGKOK • Thailand, one of Asia's top pork producers, is intensifying efforts to hold off a lethal pig virus that is causing havoc as it spreads across the region.

African swine fever - a disease that kills nearly all the pigs it infects - has been spreading through Asia from China and Mongolia to Vietnam and Cambodia. Millions of pigs have been culled, creating a global protein shortage and saddling farmers and food businesses with billions of dollars in costs.

"We're trying everything to prevent it from spreading to Thailand."

Thailand has tightened inspections at airports and border checkpoints, cracked down on illegal slaughterhouses and traders, and imposed stricter requirements for reporting hog deaths.

The authorities have detected contaminated pork products at airports and borders, but have not yet found any cases at farms.

No country is safe. There's a high risk of introduction of the virus for Thailand, as is the case for every country in the region and beyond.

PROFESSOR DIRK PFEIFFER, of the Department of Infectious Diseases and Public Health at City University of Hong Kong.

China, the largest pork producer and consumer, has been trying to contain the outbreak since August.

But with no vaccine, the virus keeps spreading.

The strain of African swine fever spreading in Asia is undeniably nasty, killing virtually every pig it infects by a haemorrhagic illness reminiscent of Ebola in humans. It is not known to sicken people, however.

Hong Kong confirmed its first case of African swine fever last week at a slaughterhouse which gets its pigs from the Chinese mainland. The authorities promptly cut hog imports from China and ordered the culling of all 6,000 of the facility's pigs. They also closed down another major slaughterhouse and warned of short-term pork shortages.

Dr Cheerasak Pipatpongsopon, deputy director-general of Thailand's Livestock Department, said: "Preventing the outbreak is our national agenda. Even if it gets into the country, we'll be quick in containing the outbreak to minimise the damage to the industry."

The Agriculture Ministry estimates that an outbreak may cost the Thai economy over US$1 billion (S$1.38 billion) if more than 50 per cent of the country's hogs are infected. That could hit nearly US$2 billion if 80 per cent are infected.

The Thai government last month approved a US$4.7 million budget to prepare the nation for a potential outbreak of the virus. 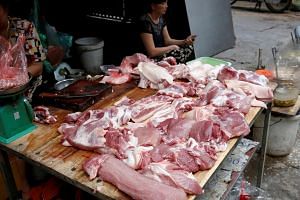 "No country is safe," said Professor Dirk Pfeiffer of the Department of Infectious Diseases and Public Health at City University of Hong Kong. "There's a high risk of introduction of the virus for Thailand, as is the case for every country in the region and beyond."

Thailand produces more than two million hogs each year, and exports about 40 per cent to Cambodia, Laos and Myanmar.

It does not import live hogs or pork meat, according to Dr Cheerasak, and now visitors are not permitted to bring processed pork products into the country.

An outbreak in South-east Asia's second-largest economy could pose a risk for major food companies like Charoen Pokphand Foods, and threaten 180,000 smallholders.

Experts also warned that pork prices worldwide are set to soar due to the outbreak, with The Telegraph reporting that international wholesale pork prices have increased by 20 per cent.

"African swine fever will be the biggest influence on global meat markets possibly for the next few years, if not possibly the decade," the British newspaper quoted Mr Tim Ryan, a Singapore-based market analyst with trade group Meat & Livestock Australia, as saying.

"I don't think there's going to be enough meat around the world available to actually fill the gap."