The Canadian man wanted in Singapore for allegedly robbing a bank in Holland Village last year was yesterday sentenced to 14 months in jail by a criminal court in Thailand.

The charges that 28-year-old David Roach pleaded guilty to include failing to declare that he was carrying the equivalent of more than US$20,000 (S$27,600) - believed to be the loot from the bank robbery - when he entered Thailand while on the run.

Yesterday's verdict was the latest twist in the Roach case. He allegedly carried out the first successful bank robbery in Singapore in more than a decade.

On July 7 at around 11.30am, Roach allegedly walked into a Standard Chartered Bank branch in Holland Village wearing a hoodie and cap. He allegedly handed the teller a slip of paper with his demands and slipped away with about $30,000 - all in just a matter of minutes.

The note had supposedly read: "This is a robbery, I have a weapon, give me money, don't call the police."

The authorities combed the area for the suspect, but Roach, who had purchased an air ticket to Thailand earlier, was believed to have taken a cab to Changi Airport. 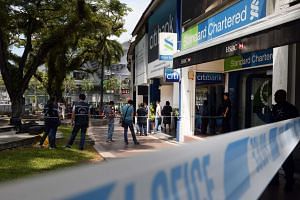 He arrived in Bangkok at 5pm, and by evening had checked into a shared dormitory room at the Boxpackers Hostel in the popular Ratchathewi district, initially paying for a two-night stay, before extending for another night.

Singapore police had already figured out his identity and informed their Thai counterparts. On July 9, he was nabbed by the Royal Thai Police, who had zeroed in on Roach using CCTV cameras in the area.

Most of the $30,000 cash he allegedly took was recovered by Thai police, as well as a notebook detailing his escape plan, including stopovers in Chiang Mai and Dubai.

The Thai police said that as part of Roach's elaborate plan to avoid getting caught, he had starved himself and slimmed down to appear different from his passport photo.

The Singapore authorities wrote to the Thai government seeking assistance to repatriate the Canadian. Thailand, however, rejected the request as it does not have any extradition treaty with Singapore.

According to Thai media, Roach was charged with violating currency regulations and money laundering. Travellers going in and out of Thailand are required to declare to Customs if they have more than US$20,000 or its equivalent in their possession.

"The suspect confessed to all charges during the investigation process," the court said.

Roach was sentenced to a year in jail for money laundering, four months for violating the foreign exchange Act and another year for not declaring he was carrying more than US$20,000 equivalent.

His sentenced was halved because he had confessed. The money found on him had also been seized.

Local reports quoted Roach's lawyer as saying that the Canadian admitted only to smuggling currency to Thailand, but not to the Singapore robbery.

Roach has until July 6 to make an appeal, and his lawyer was consulting with his relatives on whether he should do so.

Shortly after yesterday's ruling, Roach was taken back to the Klong Prem Central Prison.