BANGKOK (XINHUA) - Twelve teenage footballers rescued from a flooded cave in northern Thailand that trapped them for 18 days have returned to school amid a traditional good luck welcome ceremony, local media reports said.

The ceremony, held Monday (Aug 6) in Chiang Rai at the middle school where they study, was presided by Somboon Sirivej, deputy governor of Chiang Rai. The boys were given new uniforms and learning materials.

Somboon tied white threads on the wrists of the boys, a way to give them morale support. A representative from the Bayern Munich Football club gifted the boys with red jerseys.

An official from the Ministry of Education said that the government was concerned about the boys' study. The school will arrange catch-up classes for them.

Kanet Pongsuwan, the school director said the boys from the Wild Boar football team will be treated "like any other students at school."

The boys, aged between 11 and 16, together with their coach, 25, went missing in a cave in Chiang Rai on June 23. They were trapped when their way out had been submerged by floods triggered by torrential rains.

They were found by British divers when the search, launched by international rescuers, entered the ninth day.

An operation to extract the 13 from the cave began on July 8. All of the team were successfully rescued on July 10. 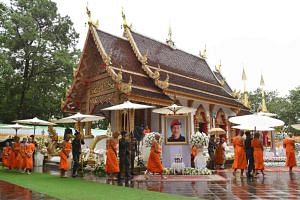 Narrow passageways, near-zero visibility and the constant threat of a monsoon made the rescue operation incredibly difficult.

Saman Gunan, 38, a former member of the Thai Navy Seals, died after he lost consciousness while placing spare air tanks along the route to the cavern where the boys are trapped.

The construction of a museum to commemorate the cave rescue is underway. A four-meter statue of Samarn, currently being sculpted, will be placed in front of the museum.

The museum will also house a 13-metre-long painting, which features rescuers, including the British divers who first found the boys.

The rescue story that garnered weeks of high-profile news coverage around the world has inspired movie companies including some from Hollywood.