BANGKOK - Seven students were arrested on Saturday (Aug 3) by Thai police following a series of bomb blasts in Bangkok on Friday, but they admitted to planting only one explosive device to attack their rivals, police said.

They told investigators they had no political motives or links to the other five explosions that occurred in other parts of Bangkok on the same day, said Teerapong Wongratpitak, chief of Metropolitan Police Division 4 yesterday.

The boys, aged 15 to 17, are students at a technical school.

They confessed to placing the device on Rama 9 Road in Suan Luang district that injured 3 street cleaners.

Apart from that explosion, two other small blasts went off near the BTS Skytrain Chong Nonsi station in central Bangkok, and three at a government complex on Chaengwattana Road in the outskirts of Bangkok.

A seventh unexploded device was later recovered by the authorities.

Police have not made any other arrests so far.

The security scare added to the two fake bombs found by police on Thursday near the Centara Grand and Bangkok Convention Centre, where the 52nd Asean Foreign Ministers' Meeting and related gatherings were being held. Two men have been arrested in connection with the fake-bomb incident.

Meanwhile, a fire, suspected to be an arson, broke out in the commercial district Siam Square on Friday. A manhunt has been launched for a man acting suspiciously according to a store's surveillance footage. Prime Minister Prayut Chan-o-cha has ordered a probe into the bomb attacks and the other incidents, which could be personally embarrassing to him as he played host for the high-profile meeting after being controversially elected prime minister in June by parliament, following the March general election.

No group has claimed responsibility for the blasts, and it was not immediately known if all of the attacks were linked.

Mr Prayut said at a news conference on Friday that an "old group" could be the possible culprits behind the explosions. He was referring to his political rivals the Red Shirt group, comprising supporters of former prime ministers Thaksin and Yingluck Shinawatra.

"But I am not ruling out other possibilities," Mr Prayut added. "Whoever did this, they want to destroy the country. They shouldn't have a place in this country." 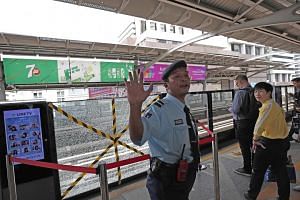 But police chief Chakthip Chaijinda indicated on Friday that initial investigations pointed to a group of southern Muslim insurgents as the perpetrators.

Still, police also did not rule out that the explosions may be backed by political and other groups.

The Muslim insurgents were widely blamed for a series of bombings in seven southern and central provinces in August 2016 that left four people dead and dozens injured.

Moving to restore confidence among foreign visitors, Tourism and Sports Minister Phiphat Ratchakitprakan and officials from his ministry visited Bangkok's Chinatown on Friday evening, shaking hands with many tourists and giving them assurances that the Thai capital is safe.