Prayut vows to take care of country in address to 3,000 Palang Pracharath supporters

Thailand's incumbent Premier Prayut Chan-o-cha, a key contender for the position of prime minister after an election tomorrow, made a surprise appearance last night as political parties staged their last election rallies across Bangkok.

"I will die for this country," he declared on a specially erected platform at Thephasadin stadium in Bangkok, where pro-junta party Palang Pracharath held its election rally. "I will take care of this country for our children… We will walk ahead hand in hand, and we will never fall back."

Looking relaxed with the sleeves of his white shirt rolled up, he appeared at the stadium just after Palang Pracharath leaders announced that there would be a "surprise", to squeals of delight by the more than 3,000 people who had gathered there.

The former army chief has been prime minister since he staged a coup in 2014, toppling a civilian government led by the Pheu Thai party.

"I have been here for five years and I know what are our obstacles," he said in a short address. "We need to get rid of those obstacles. I have done so, and I need to do more." A short distance away at the Thai-Japan Youth Centre, supporters of Pheu Thai packed an indoor stadium as they condemned the five-year-old military government for not looking out for their interests.

"Prayut has got 250 senators, but people have got empty pockets," declared Pheu Thai's de facto leader, Dr Sudarat Keyuraphan, referring to how the Constitution is designed to favour Mr Prayut.

Party leaders were cheered by fervent supporters like Ms Siriwan Surat, who told The Straits Times: "The other parties only know how to talk, but Pheu Thai delivers on their promises."

Although analysts expect Pheu Thai and the Democrat Party to win the most number of seats, the odds are stacked heavily in favour of Mr Prayut's return as head of government.

A new Constitution enacted in 2017 stipulates that the prime minister will be chosen by both the elected 500-seat House of Representatives and 250-seat Senate - which will largely be selected by the junta. Meanwhile, a more proportional election system makes it very difficult for any one party to win a clear parliamentary majority - and a coalition government is almost certain. 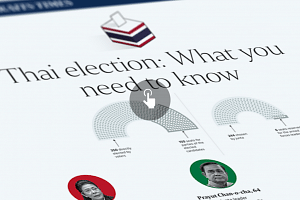 Apart from Pheu Thai and Palang Pracharath, the Democrats, as well as young upstart Future Forward Party, also held their final rallies yesterday, hammering home the key messages they had pushed since the military government lifted its ban on political activities in December.

One key issue in the polls is whether pro-military factions will get enough votes to extend the influence that they have wielded over the past five years.

Riven by a deep political divide for more than a decade, Asean's second-largest economy goes to the polls tomorrow under a system that reduces the executive power of elected representatives, yet also opens up space for new non-aligned parties.

Voter interest is high, judging by the 87 per cent turnout among those who registered to cast their ballots in advance last Sunday.

After the last election in 2011, the results of 2014 snap polls were annulled and the caretaker Pheu Thai government was overthrown by a military coup.

"The game has been designed… to ensure that the military will control the government," Dr Kanokrat Lertchoosakul, a Chulalongkorn University political scientist, told The Straits Times.

"No matter who wins the election, Prayut is going to be prime minister," she added.