BANGKOK (AFP) - Thailand's King presided over the cremation of former Leicester City owner and duty-free magnate Vichai Srivaddhanaprabha at a Buddhist temple Thursday (March 21) in a ceremony that brought together the Thai business and political elites.

The 60-year-old Thai founder of duty-free giant King Power died in October in a helicopter crash after watching his beloved football club play.

His sudden death stunned Thais and football fans who followed his fairytale-like ascent, while also raising questions about the future of his company's near-monopoly over Thailand's duty-free sector.

His week-long funeral in November had royal sponsorship for three days, and King Maha Vajiralongkorn presided over Thursday's cremation rites at Wat Thepsirin, one of Bangkok's oldest temples.

Standing on an elevated podium, the King lit the fire for Mr Vichai's crematorium.

Before the King's arrival, Mr Vichai's elder son Apichet entered the temple with a shorn head wearing saffron robes - following the Buddhist tradition of the eldest son being temporarily ordained after the death of a patriarch.

Leading the rest of the family was youngest son Aiyawatt, better known by his nickname "Top" and who is the vice-chairman of Leicester City, carrying offerings. 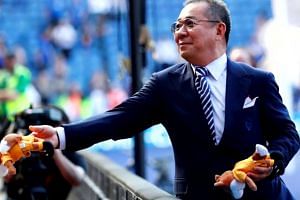 The well-connected Vichai was Thailand's fifth wealthiest man, and his four children stand to inherit a shopping empire now worth some US$5.2 billion (S$7 billion) according to Forbes.

His company's rapid rise from a single downtown Bangkok store to a near monopoly in the country's airports can be attributed more to Mr Vichai's knack for winning - and keeping - the favour of Thailand's elite.

This includes the monarchy, whose links to him were reflected in the name of his company and the former king's act of royally bestowing a surname which translates to "auspicious and prosperous light".

But in recent weeks, state-owned Airports of Thailand (AoT) is facing intense pressure to break up the monopoly after King Power's hold on it ends in 2020, and a bidding auction is to start this year.

Following outcry from rivals calling for the concession to be split up among different companies, Thailand's junta chief Prayut Chan-o-cha urged AoT to find "a suitable process to be fair".

On Monday, an AoT official told AFP it would postpone the release of its terms of reference for the bidding, and would "open for more recommendations... to comply with the government".

Thailand's Mall Group, shopping empire Central Group - both backed by billionaires - are eyeing entry into duty-free while South Korean giant Lotte is also in the hunt.