BANGKOK (AGENCE FRANCE-PRESSE) - Thailand's junta leader has appointed the scion of a notorious political clan to run the country's money-spinning "Sin City" of Pattaya, as he woos allies ahead of an anticipated run in next year's elections.

With its beaches, myriad hotels and raucous nightlife, Pattaya is a lucrative tourist hub and the heart of Thailand's massive sex industry.

Prime Minister Prayut Chan-o-Cha, who leads the ruling junta, booted out the current mayor of the free-wheeling resort and installed Mr Sonthaya Khunpluem to the influential post, an announcement in the Royal Gazette said.

Pattaya also serves as the administrative centre of the multi-billion-dollar Eastern Economic Corridor (EEC), the country's biggest ever investment project.

"It is necessary to have a high potential, experienced, and competent Pattaya city administrator in order to benefit and support the activities in the EEC," the Royal Gazette announcement said late on Tuesday (Sept 25) explaining the sudden personnel change.

Mr Sonthaya is the frontman for an independent political party in Chonburi - one of the three provinces covered by the EEC.

The Khunpluems are led by patriarch Somchai, dubbed the "godfather of the East" of Thailand, a shadowy, powerful businessman with vast land and construction interests. 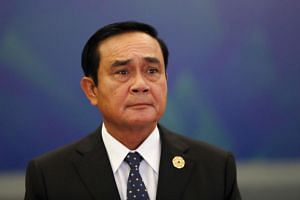 He was jailed in 2013 for murder and corruption convictions after a decade on the run, but freed late last year by Mr Prayut's government on health grounds.

His family were formerly aligned to the Shinawatras - the political dynasty who have won all Thai national elections since 2001 - but whose party was toppled by a 2014 coup.

The promotion of a Khunpluem to the Pattaya mayoralty points to a "deal" between the clan and junta, according to Dr Paul Chambers, an expert on Thai politics at Naresuan University.

It gives the ruling junta "political and economic power in eastern Thailand" in exchange for political support at the next election, Dr Chambers told AFP.

Mr Prayut earlier this week stopped short of declaring a much-anticipated run in an upcoming election, slated for February.

The junta has recently eased some restrictions on political activity after silencing all debate with the coup.

On Wednesday, the former lawmakers from the toppled Pheu Thai Party met at their Bangkok headquarters in the largest opposition gathering in over four years.

They met in front of a banner vowing to "never surrender to dictatorship".

The party hierarchy will choose a new leader in coming months to spearhead the election campaign.