The Thai girl who lost both her legs in an MRT accident in Singapore six years ago can look forward to getting a new pair of prosthetic legs.

Ms Nitcharee Peneakchanasak, now 21, has landed a six-month contract at a hospital that pays one million baht (S$40,800) a month. A pair of prosthetic legs costs about five million baht.

Dr Adison Phatthradun, director of the World Medical Hospital (WMH), said Ms Nitcharee was chosen to be a "happiness observer" because of her inspiring story about how she overcame the loss of her legs.

Ms Nitcharee, better known as Nong Than to Thais, beat 11 other applicants for the WMH job aimed at boosting patients' morale.

"She has a very positive attitude despite her disability and her smile can boost the morale of patients," Dr Adison told The Straits Times.

Ms Nitcharee will also serve as a goodwill ambassador for the four- year-old hospital in Nonthaburi, about 10km north of Bangkok. 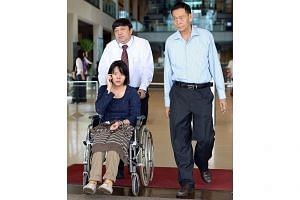 She wrote on her Facebook page that the opportunity was "valuable", adding that "age and physical conditions are not an obstacle for carrying out the job".

She was 14 when she fell off the platform at Ang Mo Kio MRT station in April 2011 and her legs were crushed by an incoming train. One of her legs was severed and the other amputated as a result.

She had just finished a month- long English course in Singapore when the accident happened.

She later sued train operator SMRT and the Land Transport Authority (LTA) for $3.4 million, claiming that they had been negligent and had failed to ensure the safety of commuters. The court ruled that SMRT and LTA were not liable for the accident. She lost her appeal against the ruling in 2014.

Ms Nitcharee has actively participated in events such as those organised by Wheelchair Scuba Thailand, a non-governmental organisation that helps people with disabilities engage in physical activities such as scuba diving and a wheelchair marathon.

The second-year mass communications student at Thammasat University left for Vancouver over the weekend to study English for two months at the University of British Columbia. She will start work at WMH in September after she returns from Canada.