It's only about trust, says former minister and social media idol

It is hard to walk alongside Dr Chadchart Sittipunt without being stopped by strangers who want a selfie with him.

So well regarded is this former transport minister that three years after the junta ousted him and his colleagues in the 2014 coup, it invited him to sit on a panel drawing up a 20-year strategy for the nation. But he declined.

His biggest claim to fame is being caught on camera in 2014 walking barefoot to a temple in shorts and a sleeveless T-shirt that exposed his rippling muscles. It inspired an endless stream of memes centred on his physique and earned him the label of "strongest minister on earth".

Today, Dr Chadchart, 52, still tries to run 10km and do about 60 push-ups every day. He still makes frequent appearances in Incredible Hulk memes, and there is an entire set of stickers bearing his likeness in the Line messaging application.

He has put his online celebrity status to good use, posting his own superhero meme on Facebook and declaring 2019 "the final battle", in reference to the March 24 election.

"If people know you, you have a channel to communicate," he tells The Straits Times.

Dr Chadchart was an engineering associate professor at Chulalongkorn University before being made minister by then Prime Minister Yingluck Shinawatra. After being ousted, he became chief executive of listed developer Quality Houses. He quit the company this year to rejoin politics.

"I was an academic before, and I was in business. So I have different perspectives that I can contribute to policy. That's quite important," he said. 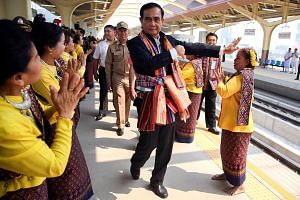 "My mum... doesn't want me to get into politics because she feels that politics is not good. It's a perception that many Thai people have, that politics should be reserved only for politicians. But I feel we need variety. We need 'outsiders' to come into politics."

Doing so could perhaps raise the quality of governing, which he feels has become more difficult over the past decade because the political conflict has made people more "emotional".

"Hopefully, we can have less conflict and be more rational," he added.

Dr Chadchart believes an election is "only about trust".

"You may have very good policy. But if people don't trust you can make it happen, they won't select you. If you don't have any policy but they trust you can lead the country, they will elect you."

A version of this article appeared in the print edition of The Straits Times on March 19, 2019, with the headline 'It's only about trust, says former minister and social media idol'. Subscribe
Topics:
More
Whatsapp Linkedin FB Messenger Telegram Reddit WeChat Pinterest Print Purchase Article Copy permalink