TUTZING, GERMANY (REUTERS) - Thai activists on Friday (Sept 25) planted a symbolic plaque declaring Thailand belongs to the people in front of King Maha Vajiralongkorn's villa in Germany, as protests calling for reforms to his monarchy grow at home.

In the pouring rain, protest organiser Junya Limprasert from Act4Dem read out a letter to the King calling for more democracy and said the Thai people did not want a king who spends most of the year in Germany.

"We want the King to give up the throne, we want the King to stop harassing the Thai people," she said outside the villa in Tutzing on Lake Starnberg, a popular playground for millionaires an hour's drive south-west of Munich.

The Thai embassy in Berlin could not be reached for comment.

Protesters challenging Thailand's palace and army-dominated establishment broke a long-standing taboo by demanding reform of the monarchy in August and the call was taken up last weekend by tens of thousands of people at a demonstration in Bangkok.

According to the Thai constitution, the monarchy must be held "in a position of revered worship".

The symbolic plaque planted in a flower pot in front of the Tutzing villa resembled one protesters cemented near the Grand Palace in Bangkok last weekend and which proclaims Thailand belongs to the people and not the monarch. Thai police swiftly removed that plaque. 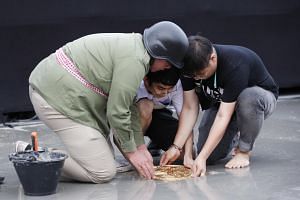 Vajiralongkorn, 68, has been Thailand's king since 2016, but spends much of his time in Bavaria, where his 15-year-old son is at school. The King's lifestyle has been fodder for German tabloids, which have published pictures of him wearing a crop top when he was Crown Prince.

Details of the King's life in Germany are not carried in mainstream media in Thailand, where lese majeste laws set a jail sentence of up to 15 years for anyone insulting the monarchy.

Thai protesters have complained about the cost of the King's stays in Europe as well as his absence from the kingdom.

The protesters in Thailand seek to reduce the King's powers under the constitution and also to remove his direct control of a royal fortune valued in tens of billions of dollars and some units of the army.