The Chinese-dominated party has been accused of masterminding an agenda to undermine special privileges accorded to the Malay Muslim majority since coming to power in the May 2018 elections as part of the Pakatan Harapan (PH) coalition.

Now with two DAP lawmakers arrested under anti-terror laws, there is a growing sense that the party - which has the lion's share of non-Malay parliamentarians - is becoming a political liability for any coalition seeking to form a government amid anxiety over the tenuously agreed transition of power from Prime Minister Mahathir Mohamad to Parti Keadilan Rakyat (PKR) president Anwar Ibrahim.

"DAP is Anwar's main ally. When he takes over, he will have to somehow deal with this Malay suspicion towards them," risk consultancy Bower Group Asia's director Adib Zalkapli told The Straits Times.

While Datuk Seri Anwar expects to take over next year, Tun Dr Mahathir has only committed to stepping down prior to the next election. This has led to swirling speculation over whether opposition MPs - 13 of whom have joined Dr Mahathir's party since the election - would be needed to bolster either camp.

Opposition Malay Muslim giants Umno and Parti Islam SeMalaysia (PAS) have strangely said they would back the current incumbent, but ruled out working with DAP, who they claim has introduced racist policies against Malays.

DAP denies this charge, and along with ethnic Indian leaders from PKR, is backing Seremban Jaya assemblyman Gunasekaran Palanisamy and Melaka state government minister Saminathan Ganesan to clear their name.

Political opinion on their arrests have been split along racial lines, with those representing Malays on both sides of the divide giving fulsome support to the police, who are refusing to rule out further arrests of DAP members.

Umno and PAS have echoed sentiments among some pro-Malay groups on social media that DAP has become a breeding ground for radicals and terrorists.

"If DAP does not distance the party from individuals including leaders who are linked to the LTTE, then little by little it confirms the perception that DAP is a terrorist party," said Umno youth chief Asyraf Dusuki.

PAS has also called for a government White Paper on the threat of LTTE elements in the country and for the arrested duo to resign their positions as "all Malaysians reject leaders involved in extremist, terrorist and militant activities". 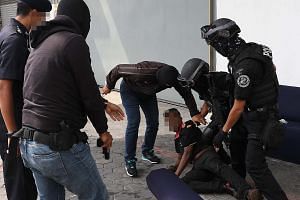 Tensions rise within Malaysian govt after arrest of DAP lawmakers

The LTTE was a separatist group that had been active in Sri Lanka until it was officially defeated in 2009. Both Dr Mahathir and Home Minister Muhyiddin Yassin have denied any influence on the police probe into an alleged move in Malaysia to revive the LTTE. The group has been declared a terrorist group by 32 countries including Malaysia, which did so in 2014.

Police say they have been tracking LTTE's activities in the country since the 1990s and acted independently in last week's arrests.

But The Straits Times understands that the matter was brought up in Cabinet last week and several ministers, including some Malays, expressed concern about using preventive detention to nab suspects including elected representatives, given PH had sternly criticised this practice as draconian while still in opposition.

"There are those who are ignorant who have supported Sri Lankan separatists groups, even financially. But they are not a violent threat here, so the use of preemptive arrests is not justified," one top security official said.

The arrests come on the back of a string of Malay unity and dignity rallies in the past month, as well as events unveiling and supporting pro-Malay economic policies attended and officiated by leaders of right-wing Malay civil society and top politicians including Dr Mahathir.

When Umno and PAS joined hands at the Muslim Faithful Unity Gathering on Sep 14, DAP was the bogeyman, as well as at the Malay Dignity Congress on Oct 6, although the premier's speech focused solely on how Malays have only themselves to blame for failing to grab a fair share of the nation's wealth.

These developments have fuelled already heightened racial tensions, following the recent controversy over the introduction of Arabic calligraphy in schools and a "Buy Muslim First" campaign.