NAYPYITAW • Myanmar's ruling party clashed with military lawmakers yesterday as it proposed steps towards changing the Constitution, its biggest challenge in nearly three years to the army's power over politics as enshrined in the charter.

Military Members of Parliament, clad in green uniforms, rose to their feet and stood in silence as Parliament voted to approve the first stage of a proposal to form a committee on amending the Constitution.

The proposal could foment tension between the army and Ms Aung San Suu Kyi's National League for Democracy (NLD). Both have been at loggerheads over the charter since the party's historic landslide election win in 2015.

The surprise bid to reform the Constitution comes as both civilian and military leaders face growing international pressure over an army crackdown on Rohingya Muslims in 2017.

Constitutional reform was a central pillar of the NLD's platform ahead of the 2015 general election, but little progress has been made as its leaders have proved reluctant to confront the military.

With another election looming in 2020, analysts see yesterday's move as an effort to shore up support for Ms Suu Kyi's party and deliver on election pledges.

"It is the election promise," Mr Ye Htut, an NLD MP, told Reuters ahead of the vote. 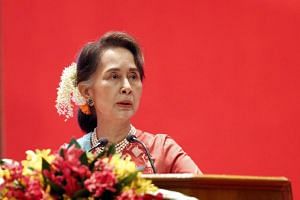 But the 2008 Constitution, drafted during military rule, guarantees the army a quarter of seats and any change to the charter needs a vote of more than 75 per cent of members, giving the army an effective veto.

NLD lawmaker Aung Kyi Nyunt, who submitted an "emergency proposal" to discuss a committee that could propose amendments, said the Constitution was "not in line with the democratic system" and the "desires of the people" should not be ignored. After the Speaker agreed to put the proposal to a vote, green-clad military lawmakers rose to their feet and stood for several minutes in silence.

Discussions on the committee are expected to continue next month.

Brigadier-General Maung Maung, a senior military official, said the NLD had not acted "in line with the law". "We don't say not to amend," he told reporters.

"They can amend but they must do it according to procedure... What kind of law will that committee analyse? How broad is the authority of the committee?"