SITTWE (Myanmar) • Myanmar's leader Aung San Suu Kyi urged people "not to quarrel" as she made an unannounced trip to conflict-battered northern Rakhine state, her first visit to the region that has seen most of its Rohingya Muslim population forced out by an army campaign.

Ms Suu Kyi, a Nobel Peace Prize winner, has faced heavy international criticism for not taking a higher profile in responding to what United Nations officials have called "ethnic cleansing" by the Myanmar army.

Yesterday, amid heightened security, Ms Suu Kyi boarded a military helicopter at Sittwe, the capital of Rakhine state, to be taken to Maungdaw, one of the districts worst hit by the violence.

"She only said three things to the people - they should live peacefully, the government is there to help them, and they should not quarrel among themselves," Ms Lewa said, quoting information from a religious leader who was present.

She only said three things to the people - they should live peacefully, the government is there to help them, and they should not quarrel among themselves.

In addition to Sittwe, Ms Suu Kyi was also visiting another epicentre of the violence, Buthidaung, as part of the one-day trip, government spokesman Zaw Htay told Agence France-Presse.

She was accompanied by about 20 people travelling in two military helicopters, including military, police and state officials, a Reuters reporter said.

Businessman Zaw Zaw, formerly sanctioned by the US Treasury for his ties to Myanmar's junta, was also with the Nobel laureate.

Ms Suu Kyi, who does not control the military, has lately appeared to take a stronger lead in the Rohingya crisis, focusing government efforts on rehabilitation and pledging to repatriate refugees.

She launched a project last month to help rehabilitation and resettlement in Rakhine and has urged tycoons to contribute.

The Myanmar leader has also pledged to allow the return of refugees who can prove they were residents of Myanmar, but thousands of Rohingya have continued to flee to Bangladesh.

Observers say Ms Suu Kyi has chosen not to criticise the army for fear of a backlash from a powerful institution that controls all security matters. The plight of the Rohingya garners little sympathy inside Buddhist Myanmar, making a defence of the minority a politically toxic cause. 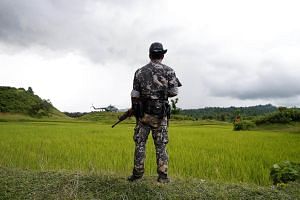 Why sanctions may not work on Myanmar's military

The UN yesterday again called for unfettered humanitarian access to the conflict zone, which remains under army lockdown.

In a statement after a two-day visit to Myanmar, UN refugee official Volker Turk also appealed for the safe, voluntary and sustainable repatriation of Rohingya.

The UN's assistant high commissioner for refugee protection said he hoped the UN refugee agency, UNHCR, would be involved in the government's plans for voluntary repatriation.