Number may go up further as rescuers finally reach Donggala, which is nearer the epicentre

Rescuers are racing against time to reach victims of last Friday's earthquake still trapped under rubble two days after the disaster. Meanwhile, the death toll continued to rise as more bodies were found.

President Joko Widodo yesterday sought to reassure the victims in Central Sulawesi that no effort would be spared to help them get back on the road to recovery. "I hope people will be patient. We are working on this together," he said.

His comments, made during his visit to parts of the provincial capital Palu, devastated by a 7.4-magnitude quake and a 3m-high tsunami it triggered, came as the death toll rose to more than 1,200 yesterday.

The number is set to go up further as rescuers finally reach Donggala, which was cut off from them until yesterday, because roads leading to the regency were damaged and communications were down.

Donggala, normally a 30-minute drive from Palu, is nearer the epicentre of the quake and the authorities are fearing the worst.

According to national disaster management agency BNPB, some 16,700 people have been displaced by the quakes, and about 2.4 million in Donggala and Palu will need humanitarian aid.

Emergency teams could not get to Palu earlier because parts of its airport runway and air traffic control tower were damaged by tremors. But the local air navigation authorities yesterday cleared Mutiara SIS Al-Jufrie airport for more aircraft, including commercial flights, to land and take off. 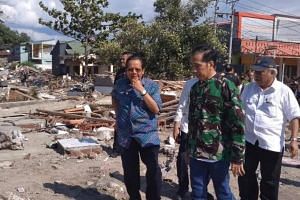 The evacuation of quake victims, including a 53-year-old Singaporean who was in Palu for a paragliding competition, also started with the additional flights.

Rescuers are trying to reach those trapped under collapsed buildings.

But they are taking a more cautious approach when digging for survivors among the debris, as aftershocks were causing building structures to be unstable. Dr Sutopo said more than 200 aftershocks have been recorded since Friday.

Officers from national search and rescue agency Basarnas were seen chipping carefully through rubble at what remains of the Roa Roa Hotel in downtown Palu, while another team at the nearby Tatura Mall were trying to establish a safe access point into the building.

Basarnas official Agus Haryono told reporters at the site that rescuers had detected mobile-phone signals inside the mall and were trying to find a way to get in.

Before he arrived in Palu yesterday, President Joko mobilised the TNI and police to support rescue and relief operations. His administration has also set aside 560 billion rupiah (S$51.4 million) for relief efforts.

This latest crisis comes after earthquakes hit Lombok, a resort island in West Nusa Tenggara province, located south of Sulawesi, recently. Relief efforts are still ongoing in Lombok, where nearly half a million people were left homeless following a series of deadly earthquakes in July and August.

Meanwhile, two Singapore Civil Defence Force officers are in Indonesia as part of a team from the Asean Coordinating Centre for Humanitarian Assistance.

S'porean paraglider helps pull out mum and daughter from rubble

Field kitchens, shelters being set up amid fuel shortage, looting