Tycoon reveals secrets of success - and thoughts along the way

One of Asia's richest men has kept his private life, and indeed the story of how he began amassing his US$14 billion (S$19 billion) fortune, under wraps for the best part of a century.

But the notoriously media-shy Robert Kuok, 94, has opened up in a 376-page memoir that details his rise from a broken family in Johor Baru to becoming Malaysia's richest man and more after moving to Hong Kong 38 years ago.

"Things may have happened in Malaysia and elsewhere that weren't ideal, but... he is quite fatalistic, I believe, and resilience has been one of the keys to his success," the book's co-author Andrew Tanzer told The Straits Times.

Mr Tanzer, a former Forbes reporter, was one of the few to ever interview Mr Kuok, spending weeks with the tycoon before producing his 1997 cover story for the financial magazine.

The billionaire father-of-seven would continue to invite the journalist to share meals even after the article was published. "I felt that he was just the man to record my reminiscences and help me to craft a book," Mr Kuok wrote in his acknowledgements in the memoir.

The tell-all tale has already begun to make waves, especially in his country of birth.

In the book, Mr Kuok criticised implicitly the policy of preferential treatment for Bumiputeras in Malaysia, and said he made one "strong attempt to influence the course of history" of the country but failed. 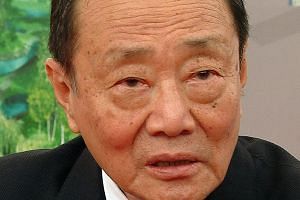 The way your people are going - excessive handicapping... showering love on your first son - your first born is going to grow up with an attitude of entitlement.

"The train of the nation had been put on the wrong track," Mr Kuok wrote, referring to a private meeting in September 1975 with soon-to-be prime minister Hussein Onn.

In the course of the meeting, Tun Hussein said he could not "sell my (Mr Kuok's) formula" of removing pro-Malay policies "to his people".

The ruling party Umno has been swift in its response.

Describing Mr Kuok as "once the sugar king, the sole exporter and importer of sugar (in Malaysia)", Umno supreme council member Bung Moktar Radin said he should "invest more in Malaysia to provide opportunities to the various ethnic groups here who can share the wealth with him".

Here's a look at other extracts from the book.

Mr Robert Kuok Hock Nien was born in 1923, the youngest of three sons in a Chinese family which he singled out as probably among the 1,000 richest in British Malaya.

He said he developed a deep antipathy towards colonialism and also outlined in the book, sometimes in chilling detail, the brutal Japanese occupation.

Mr Kuok said he had to continue fighting against favouritism in business by the same two economic powers - Britain and Japan - after Malaya gained independence in 1957. But these handicaps were also part of what drove him to success.

"Until you get on the top ledge, you are always in danger of drowning," he said. He referred to his "humiliation... at the hands of the banks" after taking over the sole distribution of rice in South Johor when his father died in 1948. "Now, if that doesn't drive you forward in life to make as much money as possible so you can thumb your nose at those bankers, then what will?"

Mr Kuok also revealed how his father had a second family and abused his mother, often leaving her without enough money to feed her children especially as they suffered through the Great Depression that began in 1929.

But he cited his mother's wisdom and calm - dubbing her the "hidden captain" of his empire - in the face of adversity. He hailed her as a steadying influence in his life.

Undoubtedly, Mr Kuok, despite some generalisations in his book, paid special care to personal relationships, both with powermongers and others he came into contact with. Chief among them was his brother, William, who joined the Malayan Communist Party and fought in the guerilla war against the British. He was killed five years after the war began in 1948.

Mr Kuok entered Raffles College in Singapore in 1941 for six months before war broke out. But in that short time, he befriended many future leaders of Malaysia and Singapore, including Mr Lee Kuan Yew.

"I have not come across anyone more driven than Kuan Yew," he said.

By the mid-1960s, Mr Kuok had been dubbed "The Sugar King from the East" and was already diversifying his portfolio, but "I felt I couldn't turn down requests from the young Malaysian government to help them to monitor or run new businesses."

I have not come across anyone more driven than Kuan Yew. He wanted to be the best informed, the one with the most cogent views, the views that would prevail. Even at Raffles College, Kuan Yew already had a strong fiduciary sense. He was born with it.

An important request also came from Singapore - to chair Malaysia-Singapore Airlines. He was cajoled into accepting it after then Deputy Prime Minister Goh Keng Swee said: "There are hardly any links left between Malaysia and Singapore. If you don't want to serve, then this link will also go."

Mr Kuok placed the blame on Singapore for pushing for the eventual breakup of the airline.