KUALA LUMPUR (THE STAR/ASIA NEWS NETWORK) - Audit director Nor Salwani Muhammad did not breach any code of conduct when she slipped a recording device in a pencil box to capture audio during a coordination meeting discussing amendments to the 1Malaysia Development Berhad (1MDB) audit report on Feb 24, 2016, the High Court heard on Wednesday (Nov 27).

Former auditor-general Ambrin Buang said that Nor Salwani - then a deputy audit director - was part of the National Audit Department team and was supposed to take notes. However, she ended up outside the meeting room as there was not enough space inside.

The meeting was called by former chief secretary to the Government Ali Hamsa, involving 1MDB and several related agencies as instructed by then Prime Minister Najib Razak.

No minutes were recorded during the meeting.

At the end of the meeting, four issues were agreed to be removed from the audit report, including the issue of two conflicting financial statements.

Tan Sri Ambrin also told the court that he agreed to make the amendments to the audit report - particularly the two versions of financial statements - when Najib told him that there would be a thorough probe on the matter.

However, Ambrin said there was no confirmation whether Najib actually "got to the bottom of it". 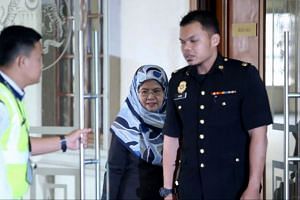 Arul Kanda, Najib to face one charge each over tampered 1MDB audit report

Ambrin said he felt cheated when he discovered no police report was lodged despite Najib's assurance.

"On that premise, I agreed to drop the issue of the two versions (of the 1MDB financial statements) from the (1MDB final audit) report," he added.

Najib is accused of using his position to order amendments to the 1MDB final audit report before it was tabled to the PAC to avoid any action against him.

He allegedly committed the offence in Putrajaya between Feb 22 and 26, 2016.

The hearing continues before Justice Mohamed Zaini Mazlan on Thursday.