When a magnitude-7 quake struck Lombok island last night, Law and Home Affairs Minister K. Shanmugam, who was there to attend a counter-terrorism conference, was working on his laptop in his room on the 10th floor of a hotel.

In a Facebook post at about 9.55pm, he said: "Suddenly the room shook violently, walls cracked, it was quite impossible to stand up. Heard screams."

He said that he and the other 10 members of the Singapore delegation were safe.

The regional counter-terrorism conference being held in Lombok has been postponed and the attending delegates were advised to return home, local media reported. In addition to Singapore, participating countries include Malaysia, the Philippines, Thailand and Australia.

Tremors could be felt in nearby Bali. Singaporean tourist Ramya Ragupathi was just finishing a massage in Ubud when the quake struck Lombok last night.

"I was a little shaken. It was quite intense. I felt really woozy, and at first thought it was because of the massage. But then the receptionist got everyone to move and evacuate," she said.

Ms Ragupathi, 37, who owns a gluten-free food firm in Singapore, said local staff at her accommodation stayed calm and were helpful. 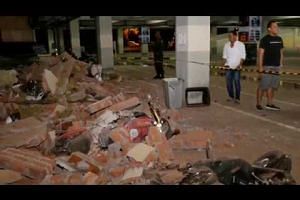 Shanmugam caught in Lombok quake: 'The room shook violently, walls cracked, it was quite impossible to stand up'

The powerful quake followed the magnitude-6.4 quake a week earlier that killed 14. The latest tectonic quake's epicentre was at the same location, but it ran from land to sea floor, causing small tsunamis.

Singaporean doctor Edison Lauw, 54, who felt mild tremors in Banyuwangi, Java, about 300km west of the epicentre, said lights were swaying and all the staff and guests at the Ikan Bakar Pesona restaurant stood up when they felt the quake. "I felt giddy, " he said.

Singapore's National Environment Agency issued a high alert advisory, calling it a large earthquake, adding that there were no reports of tremors in Singapore.

Mr Shanmugam advised Singaporeans in Lombok to contact the Singapore Embassy in Jakarta on +62-(811)-863-348.

• With additional reporting by Tee Zhuo