JOHOR BARU • Two directors and a lorry driver of a used tyre-processing company were charged in the Sessions Court in Johor Baru yesterday with being involved in the dumping of chemicals into Sungai Kim Kim in Pasir Gudang.

According to the charge sheet, lorry driver Maridass was accused of illegally disposing of chemicals into Sungai Kim Kim on March 7.

Wang and Yap are accused of conspiring with him.

The trio pleaded not guilty when the charges were read before Judge Hakim Jailani Rahman in Johor Baru yesterday.

It was learnt that they will face more charges following the incident at Sungai Kim Kim, which affected thousands of lives.

Meanwhile, Johor police chief Mohd Khalil Kader Mohd was quoted yesterday as saying that police are hunting for another Singaporean suspect in his 30s to assist its probe into the incident.

Datuk Mohd Khalil said state police would be working with their Singapore counterparts to track down the man, the New Straits Times (NST) newspaper quoted him as saying. 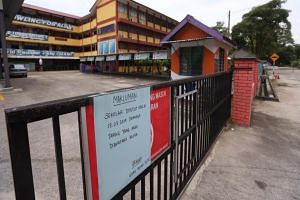 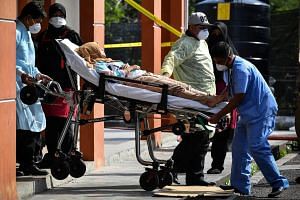 The missing suspect, a businessman, was believed to be one of the owners of a factory which was involved in dumping toxic waste into the river, he said.

"We are tracking down the man and will be conducting further investigations in this case. We understand that three men, including a Singaporean, were charged in court today," he told a news conference, as quoted by NST.

The Malaysian federal government and Johor state officials scrambled for some two weeks to clear chemicals from the river, which discharges into the Strait of Johor just north of Pulau Ubin.

The Malaysian authorities said on March 17 that the clean-up of the 1.5km polluted stretch of the river was complete, with 1,250 tonnes of soil, water and sludge removed.

The government shut 111 schools in the Pasir Gudang area to prevent more students from falling sick and becoming hospitalised after inhaling fumes from the chemicals.

Many residents who live near the river also fled at the height of concerns over toxic gases wafting into their homes.

The Singapore authorities monitored the chemical spill closely, and issued regular media releases to inform the public that the Republic had not been affected by the incident.

A version of this article appeared in the print edition of The Straits Times on March 25, 2019, with the headline 'S'porean among trio charged over dumping of chemicals into Johor river'. Subscribe
Topics:
More
Whatsapp Linkedin FB Messenger Telegram Reddit WeChat Pinterest Print Purchase Article Copy permalink