The world's largest palm oil trading company has defended its environmental record against accusations by activist group Greenpeace that its five-year-old pledge to end deforestation across its supplier network has been a "total failure".

Singapore-based Wilmar International, which accounts for half the world's supply of palm oil, has contributed to the deforestation of an area twice the size of Singapore since 2015 because it buys from suppliers with a history of poor forestry practices and poor human rights, Greenpeace said in a report last Wednesday.

But in an interview with The Sunday Times, Wilmar's general manager for group sustainability Perpetua George struck back.

Ms George said the company has distanced itself from shady suppliers and is serious about secure sustainable sources of palm oil, which is used in everything from cosmetics to cookies.

"We are being proactive. We are out there doing the work," she said.

"There is a sense out there that nobody knows what's going on with our supplier network, but it's not true."

We are being proactive. We are out there doing the work... There is a sense out there that nobody knows what's going on with our supplier network but it's not true.

The company, she said, had either stopped buying palm oil from suppliers listed in Greenpeace's report or secured moratoria on their logging of natural forests.

In total, Wilmar has suspended purchases of palm oil from 16 supplier groups found to be clearing natural forests and peatland.

The company has identified 50 out of its total network of 117 companies with "varying issues with deforestation", Ms George said.

There is growing frustration among activists that big plantation companies, including pulp and paper suppliers, are, in effect, having their cake and eating it too by announcing big sustainability goals in order to hold on to brands such as Nestle and Unilever, only to hide misdeeds among their opaque supplier networks.

NEED TO DO MORE

We don't want Wilmar to simply cut off companies when Greenpeace reports them to it... We want Wilmar to buy only from producers it can prove are clean. That is what it promised the market back in 2013. 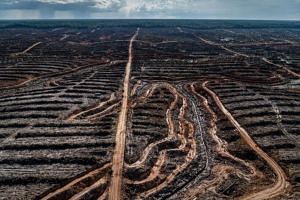 APP said its purchase of this timber was the result of a clerical error, and it had to quarantine 800 truckloads of timber from the suppliers.

In July, two of Wilmar's senior executives resigned after a Greenpeace report linked the company to suppliers owned by Gama Corp.

Gama's chief executive, it emerged, was a non-executive director and board member at Wilmar. Last December, Greenpeace alerted Wilmar that six of Gama's business units had not promised to swear off deforestation.

Wilmar has since stopped buying palm oil from the supplier.

Mr Kiki Taufik, global head of Greenpeace's Indonesia forests campaign, said the NGO is locked in an unending game of whack-a-mole, clobbering Wilmar's unscrupulous suppliers while the company fails to clean up its network.

"We don't want Wilmar to simply cut off companies when Greenpeace reports them to it," he said.

"We want Wilmar to buy only from producers it can prove are clean. That is what it promised the market back in 2013."

But Wilmar has rejected these allegations.

In an Aug 31 letter to Greenpeace seen by The Sunday Times, the company said five of the 18 are no longer suppliers. And seven of the remaining 13 suppliers have issued moratoria on logging natural forests. These stoppages are regularly verified by the company, the letter asserted.

Another two suppliers have either stopped buying palm oil from offending businesses or sold the assets entirely. Wilmar is waiting for data on four more.

Ms George said the solution is more complicated than simply cutting off suppliers. Once suspended, they have an incentive to sell to less squeamish customers in markets such as China. This so-called leakage marketplace accounts for 30 per cent of the refining capacity among palm oil mills in Indonesia and Malaysia, she said.

This realpolitik underpins Wilmar's prodding of 50 suppliers that it has identified as potentially clearing forest, Wilmar argues.

The company will retain suppliers caught clearing forests and operating outside their concession if they can show a plan to mend their ways, Ms George said, adding: "As long as the commitment is there, there is no need for suspension."

Greenpeace rejects this. Mr Kiki said: "The threat that bad producers will just run to China is an old excuse. Engagement without penalty is the equivalent to talk and log."

Still, Wilmar has vowed to pick up the pace of its oversight of its vast supplier network, comprising 1,500 plantations spread over 11 million hectares.

At the end of this month, it will announce plans to speed up monitoring of all suppliers to ensure none is clearing natural forest, rather than just those deemed high-risk.

But Wilmar and its peers may be forced to do more, should Indonesia suffer a repeat of the fires that scorched two million hectares of land in 2015.

The conflagration contributed to thousands of premature deaths and caused an estimated US$22 billion (S$30 billion) in damage.

"We need to remind people of the suffering that was endured then and the billions that the fires cost," Mr Kiki said. "That is what is at stake if we don't stop deforestation."