Several parts of southern Thailand were shrouded in haze yesterday caused by forest fires in Indonesia, and the authorities warned that pollutant levels had soared to unhealthy levels in five southern provinces - Narathiwat, Phuket, Satun, Trang and Yala provinces.

The Southern-East Coast Meteorological Centre reported that concentrations of particulate matter less than 2.5 micrometres in diameter (PM2.5) exceeded the safety threshold of 50 micrograms per cubic m of air over 24 hours in all five provinces.

The dominant pollutant in haze, the fine particulate matter PM2.5 is especially dangerous because it is minuscule and can penetrate deeply into the lungs, causing respiratory illnesses and lung damage.

Thai meteorological officials warned that high pollution levels would continue in the south until at least Thursday, as the south-westerly monsoon was strengthening and bringing more haze from the fires in Indonesia.

It said even rain would not significantly reduce the problem, which will likely improve when wind directions change in the middle of, or late, next month.

Thailand's Department of Disaster Prevention and Mitigation has issued warnings against outdoor activities, including driving and sailing. Residents have been urged to wear masks and to keep doors and windows tightly closed.

The haze is thicker on Phuket's beaches than in its city centre, as mountains block some of the smoke from moving inland, said Mr Charn Jindachote, the department's official based in Phuket.

"Smog happens in Phuket around this time every year as a result of agricultural burning in Indonesia, but this year is the worst, as there is currently no rain and not enough wind to take the smog elsewhere," Mr Charn said. 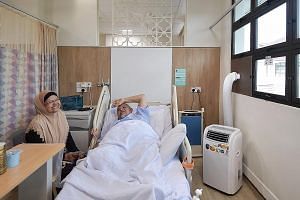 Parts of Thailand were also hit by haze in December last year and early this year. The authorities blamed vehicle exhaust for the pollution in Bangkok after almost one million new vehicles were registered in the capital alone last year.

The slash-and-burn tactics of farmers in both northern Thailand and Myanmar were also held responsible for the pollution.

More than 400 public schools in Bangkok were closed for two days in early January as the air quality reached unhealthy levels, while residents in the northern city of Chiang Mai braved the haze to vote in a general election in March.

In 2015, which was a bad year for forest fires in Indonesia, the haze was so thick in southern Thailand that many flights could not land in Phuket for half a day in October.

"It is too early to tell that this year's haze in Thailand would match the level in 2015 since it has just begun to spread. But at the regional level, I would say it is similar to the one in 2015," Mr Tara Buakamsri, Greenpeace Thailand's country director, told The Straits Times.