JAKARTA (AFP) - South-east Asia faces a growing risk of extremist violence as Islamic State in Iraq and Syria (ISIS) group supporters increasingly work together, but law enforcement agencies are unprepared for the new threat, a report warned on Tuesday (Oct 25).

The main danger lies in the strife-torn southern Philippines, where a handful of Islamic extremist groups have sworn allegiance to ISIS, according to the report from think-tank the Institute for Policy Analysis of Conflict (IPAC).

The groups have links to other parts of the region, particularly Indonesia and Malaysia, and ISIS has endorsed a Philippines-based militant as "amir", or leader, for South-east Asia, the report said.

"ISIS has deepened cooperation among extremist groups in South-east Asia," said the report, adding the trend had widened the "extremist recruitment pool" and opened new channels for international funding and communication.

"More deadly violence in the Philippines involving alliances of pro-ISIS groups is a matter of when, not if. It may also increase the possibility of cross-border extremist operations."

However, it noted that "most law enforcement agencies retain a strongly national orientation, without in-house expertise on groups outside their own borders".

While ISIS is rapidly losing territory in Iraq and Syria, the effect may be to increase the risk of revenge attacks in South-east Asia, said the report by Jakarta-based IPAC, headed by terrorism analyst Sidney Jones. 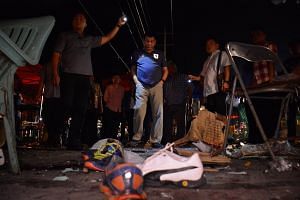 The warning came as the United States ambassador to Manila Philip Goldberg said on Tuesday that America wants to remain involved in the campaign to quell Islamic militancy in the southern Philippines, after President Rodrigo Duterte threatened to kick out US forces.

Parts of South-east Asia have long struggled with Islamic militancy and hundreds of radicals from the region have flocked to join ISIS.

South-east Asians fighting for the militants have formed their own unit in the Middle East, called Katibah Nusantara, and are believed to be in regular contact with militants back home.

The region suffered its first ISIS attack in January when extremists launched a deadly suicide bombing and gun assault in Jakarta.

The IPAC report examined four pro-ISIS groups in the southern Philippine region of Mindanao and their links to neighbouring countries.

It said the Maute group, which is accused of carrying out a bombing in Mr Duterte's southern home town of Davao in September that killed 15 people, had the "smartest, best-educated and most sophisticated members".