Progress in code of conduct consultations; Beijing says it is ready to work with Asean

Attempts to reduce tension in the contested South China Sea reached a milestone yesterday when Beijing revealed that Asean and China had completed the first reading of the single draft negotiating text for a code of conduct (COC).

"This represents a new and important progress in the COC consultations and marks a critical step towards the goal of completing the consultations within three years' time," China's Foreign Minister Wang Yi told Asean foreign ministers who gathered this week in Bangkok for the bloc's annual foreign ministers' meeting and related dialogues with partners like China.

Based on this common text - which has so far been kept under wraps - the countries now expect to further narrow down differences in positions.

In a press conference later yesterday, Mr Wang expressed support for Asean's recently drafted vision of the Indo-Pacific region - a non-binding document issued in June to articulate Asean's own perspective on regional cooperation amid the big-power rivalry in its backyard.

It emphasises an inclusive and "rules-based framework" to "help to generate momentum for building strategic trust and win-win cooperation in the region".

Mr Wang told reporters: "Many of the principles and ideas that are contained in this (Asean) outlook are consistent with China's views, for example, a commitment to Asean centrality, staying open, inclusive and transparent."

He said Beijing was ready to work closely with Asean to "actively guide and promote our cooperation" for growth.

China claims almost the entire South China Sea, a strategic waterway which is also claimed in parts by Asean countries like Vietnam, the Philippines, Malaysia and Brunei; as well as Taiwan.

Beijing has resisted subjecting its territorial claims to international tribunals and instead reclaimed and installed military facilities on disputed islands.

It chafes at the US navy's "freedom of navigation" naval operations in these waters, which it regards as external interference.

Many of the principles and ideas that are contained in this (Asean) outlook are consistent with China's views, for example, a commitment to Asean centrality, staying open, inclusive and transparent.

For years, Beijing has been working with Asean to draw up a binding code of conduct in the South China Sea.

In the meantime, fierce contests over fish, oil and other resources have erupted at sea.

In June, a Philippines fishing boat anchored off a disputed seamount - believed to hold large quantities of oil and natural gas - sank after it was rammed by a Chinese boat.

Meanwhile, Vietnam and China are currently engaged in a weeks-long stand-off near an offshore oil block.

While Hanoi has recently extended the operations of an oil platform near the Spratly Islands, it has also demanded that China withdraw a survey ship and coastguard vessels that it says have ventured into Vietnam's exclusive economic zone.

China, meanwhile, is conducting two large-scale military drills in the waters around Taiwan this week in a show of its prowess. 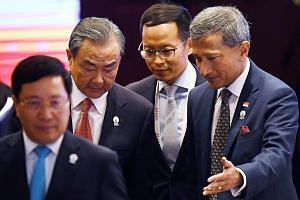 But "some friction may crop up from time to time" due to historical maritime disputes and these should be resolved by countries directly concerned through peaceful means.

While not naming the US, Mr Wang said countries outside the region "should not deliberately amplify such differences or disputes from the past" and try to sow distrust between China and Asean countries.

The first batch of 100 recipients under this programme will head to China next month for their studies.