Volcanic ash has forced Bali's international airport to close three times this month, prompting some travellers in Singapore to adjust their holiday plans.

The latest closure at the Indonesian resort island's Ngurah Rai Airport yesterday lasted for about two hours. According to some travel agents, a number of travellers have decided to go to other regional destinations instead, despite the reopening of the airport.

At Dynasty Travel, about 30 customers who planned to go to Bali either this month or next month are now going to Penang or Langkawi in Malaysia, or Phuket in Thailand.

The travel agency said it initially had around 180 people travelling to Bali during this period. Said Ms Alicia Seah, director of marketing communications at Dynasty Travel: "The rest were not affected and most of them are adopting a wait-and-see attitude. We have recommended (travellers) to purchase travel insurance in case of flight delays of more than six hours." 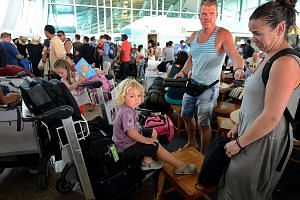 Chan Brothers Travel said it has had about five cancellations for trips to Bali, and one couple had postponed their trip from this month to next month.

The volcanic ash, from the eruptions of Mount Raung on Indonesia's main island of Java, has resulted in flights being grounded for days. Nearly 900 flights at the airport in Bali had been delayed or cancelled because of the closures earlier this month.

As of yesterday evening at Changi Airport, two flights to Bali were cancelled and four flights going there were delayed. One flight from Bali was cancelled as well.