YANGON (REUTERS) - At least six people were wounded in firing as Myanmar soldiers hunted ethnic Rakhine insurgents in the western town of Mrauk U, residents said on Tuesday (March 19), while the military issued a statement saying a convoy was ambushed entering the historic temple town.

Soldiers moved into the town on Monday night, marking an intensification of violence in Myanmar's Rakhine State, where for the past few weeks security forces have waged a campaign against a militant group called the Arakan Army.

While Rakhine State gained global attention after the army drove some 700,000 ethnic Rohingya Muslims across the border into Bangladesh in late 2017, the ethnic Rakhine are largely Buddhist like the majority of Myanmar's people.

The military said insurgents attacked a military convoy approaching Mrauk U before retreating into houses in the town.

There was "shooting back-and-forth", it said in a statement.

Mr Myo Oo Khaung Sayataw, a monk in the town, said he had taken six wounded people to hospital on Monday night.

"I went out to the wounded people, because no one dared to go out," he said. "I saw six military cars, they were shooting everywhere." 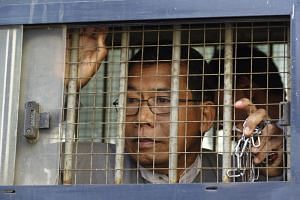 He said a seven-year-old girl with burn wounds was among the casualties.

A regional lawmaker, Mr Tun Thar Sein, told Reuters he had visited the six wounded at the hospital.

Mrauk U, the former capital of an ancient kingdom, is popular with foreign travellers who come to see its hundreds of centuries-old pagodas, which Myanmar wants classified as a World Heritage Site.

Residents said the clashes had made them too frightened to leave their homes.

"I don't dare go out, because of the gunfire," said Mr Shwe Tun Aung, a Mrauk-U resident reached by phone. "I closed my door, and am still in the house until now. The situation is not good, civilians are in trouble."

Military spokesmen did not answer calls from Reuters seeking comment, but the statement posted to Senior General Min Aung Hlaing's website portrayed the fighting as an ambush.

"AA terrorists attacked a military convoy while the convoy was marching into Mrauk U town for security," the statement said. "AA terrorists took cover in civilian houses."

A spokesman for the insurgents did not answer phone calls.

Myanmar's leaders have vowed to crush the rebels, who are fighting for autonomy for Rakhine, and the violence has intensified since early January, when the Arakan Army launched attacks on police that killed 13.

Since then, clashes have spread, displacing several thousand people, and authorities have declared large parts of the north of the state off-limits to most aid agencies.

The United Nations head in Myanmar, Mr Knut Ostby, said in a statement on Tuesday that he was "deeply concerned" by the reports of fighting and urged all sides to ensure the protection of civilians.

The sentencing on Tuesday of two prominent Rakhine nationalists to 20 years in prison for high treason raised fears that unrest in the state could spiral further out of control.

Dr Aye Maung, a politician, and writer Wai Hin Aung, were found guilty by a court in Sittwe, the state capital.

They had been charged under sections of Myanmar's colonial-era penal code that cover high treason and outlaw speech that can cause "fear or alarm".

Mr Aye Nu Sein, the lawyer for Wai Hin Aung, said it was unfair that he had been charged with multiple offences for a single act.

The pair were arrested in January 2018 over comments made during an event in Mrauk-U marking the anniversary of the fall of the independent Rakhine kingdom to the Burmese in 1785, when they allegedly spoke favourably of the Arakan Army.

The ceremony ended in violence, with police shooting dead seven demonstrators and wounding 12.

The long sentence handed down to the two men could further escalate conflict in the region, said Mr Sithu Aung Myint, a political analyst.

"The result will make Rakhine people more frustrated," he said. "There might be more protests. It will likely create further instability in the region."