BEIJING (CHINA DAILY/ASIA NEWS NETWORK) - The summit meeting between President Xi Jinping and his US counterpart Donald Trump is one of the most anticipated events after the 19th National Congress of the Communist Party of China, where Xi, also general secretary of the CPC Central Committee, declared that China has entered a "New Era".

Mr Trump's three-day state visit to China from Wednesday acquires special significance also because Sino-US relations will be the most consequential external factor in China's development over the next three decades.

A peaceful external environment is needed for China to realise the Chinese Dream of national rejuvenation, and for the United States to pursue Mr Trump's ambitious "Make America Great Again" policy.

So as an established power and an emerging power, the US and China should work together to beat the "Thucydides trap", in accordance with Mr Xi's diplomatic policy of a new model of major country relationship between the two sides.

Economic competition between the two countries has become more pronounced, as this year, China's GDP is expected to exceed US$12 trillion (S$16.34 trillion), equivalent to 65 percent of the US' GDP (US$18.5 trillion), and many experts say China could overtake the US as the world's largest economy sooner than later.

While Mr Trump has asserted that China is taking advantage of the US through unfair trade practices, and some US congressmen have called for more rigorous screening of Chinese investment to safeguard national and economic security, strategic competition between the two countries in the Asia-Pacific region is growing.

And as China expands its presence in the region through increasing engagement with the regional countries, the US continues to implement its "pivot to Asia" policy.

But despite drawing worldwide criticism for pulling out of the Paris climate accord, Mr Trump deserves credit for the way he has handled relations with China. 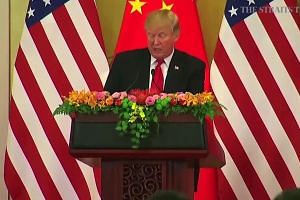 After the initial concerns that Mr Trump might deviate from the one-China policy and impose high tariffs on Chinese imports, reason seems to have prevailed. As such, the two sides should widen their cooperation beyond crisis management to focus on energy and infrastructure, not least because they are related to Mr Trump's "America First" agenda. And US companies should seriously consider the Atlantic Council's appeal to take active part in the Belt and Road Initiative.

General Electric and Caterpillar have already shown interest in the initiative, as they believe it offers a good opportunity to sell more equipment, technology and services. In fact, the Economist has said that last year GE reaped US$2.3 billion from Belt and Road-generated orders, up almost three-fold from 2015.

Moreover, since the China-proposed Asian Infrastructure Investment Bank began operations in January last year, it has implemented joint financing projects with the World Bank and the Asia Development Bank in countries such as Bangladesh and Tajikistan.

This shows established international financial institutions such as the World Bank and the ADB alone cannot meet the global population's demands for infrastructure financing. Therefore, China and the US should consider a global partnership for development in order to boost economic growth in both countries as well as the rest of the world.

Beijing and Washington should also advance cooperation on security issues to combat terrorism, piracy and cross-border crimes. And since tensions between them are likely to rise, they could explore the possibility of an "Asia-Pacific community".

Former US national security adviser Zbigniew Brzezinski suggested a similar idea when he proposed a "Pacific Charter" between China and the US, which was inspired by the Atlantic Charter during World War II.

China and the US can't afford to fight each other. So, as Mr Xi leads China on a new development path that transcends conventional wisdom, the US should seek an innovative way to deal with China's rise.

And given that the defining attribute of international relations in the 21st century is high interdependence, the "Thucidydes trap" can certainly be avoided if the two sides pursue deeper and wider cooperation, which in turn will ensure continued development and prosperity.