DPM Teo: Republic will continue to back US-led coalition as it battles terror group

Singapore is open to greater cooperation with its neighbours in South-east Asia, as well as Australia, in the fight against the Islamic State in Iraq and Syria (ISIS), said Deputy Prime Minister Teo Chee Hean.

He said the country will also continue to back the United States-led coalition as it steps up strikes against the terror group after the recent attacks in Paris, which killed 130 people. "We will help in whichever way we are able to," he said. "But our view has always been that it's not just the security approach, we have to take the approach of dealing with the ideology as well."

Mr Teo was speaking to the media in Jakarta yesterday as he wrapped up a three-day working visit to Indonesia, where he met President Joko Widodo and Indonesia's Coordinating Minister for Political, Legal and Security Affairs, Mr Luhut Pandjaitan, among others.

"We already have a very strong relationship with Indonesia on counter-terrorism. We have good exchange of information between our law enforcement agencies as well as our intelligence agencies," he said. 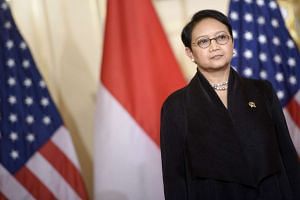 Issue of airspace over Riau 'not about sovereignty'

"President Jokowi also expressed a strong interest in this (and) clearly ISIS is a new threat for the region... so we need to strengthen our capability in a number of areas again."

Besides sharing intelligence, Mr Teo said collaborations can include help in the rehabilitation and counter-radicalisation of extremists.

Security experts believe that Singapore may be targeted by ISIS because of its tough stand against the militant group, among other reasons. The country has also been a member of the coalition formed to combat the terror group.

Professor Rohan Gunaratna, who heads the International Centre for Political Violence and Terrorism Research, was among experts who had previously called for greater regional cooperation to tackle ISIS.

He said the "Five Eyes" intelligence-sharing alliance among the US, Australia, Canada, New Zealand and Britain can be a model for Asean nations such as Singapore, Malaysia, Indonesia and the Philippines. "You need regular interactions at a working level between not just intelligence chiefs, but also staff to build... rapport and trust."

To prevent an ISIS attack in the region, Australian Prime Minister Malcolm Turnbull on Tuesday called for greater intelligence sharing within Asean. Mr Teo said Singapore has "always been doing that" and remain open to exchanging information with the Australians.

Besides countering the scourge of terrorism, Mr Teo said he had talks with Indonesian leaders on how to strengthen the relationship between their militaries as well as explore ways resolve the transboundary haze crisis together.

He said Singapore's only objective is to work with Indonesia and other affected countries to solve the decades-old crisis. "It is also a subject which has become of international significance because of the importance of having to control carbon emissions."

Mr Teo added that Singapore looks forward to resuming a successful bilateral environmental project in Indonesia's Jambi Province which included ways to detect hot spots on a local level, sustainable agriculture and how to deal with and manage hot spots when they arise.

"We are willing and ready to continue to resume this programme whenever our Indonesian friends are ready," he said. "And we are also happy to continue to contribute our assets and resources, like aircraft for water bombing."

Mr Teo said he had a useful and productive visit to Jakarta, with both Singapore and Indonesia expressing confidence and interest in strengthening the relationship further. "Prime Minister Lee Hsien Loong will be making a visit to Indonesia next year as part of our exchange of visits for annual retreats and there will be an opportunity to take the relationship further"