BANGKOK - Two journalists from Singapore and Malaysia are being investigated by Myanmar police for breaching export and import laws after flying a drone over a parliament building in Naypyitaw.

Myanmar's Ministry of Information announced their detention on its Facebook page on Friday (Oct 27) night, while publishing pictures of their drone and their journalist visas.

On Saturday (Oct 28) afternoon, Mr Tun Tun Win, a police officer at Myoma police station in Naypyitaw, told The Straits Times: "The foreigners are now still at the Myoma Police Station and the locals are sent to Pyinmana prison. The case has been opened with Section eight of export import law." 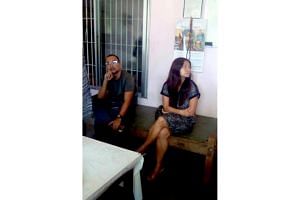 Under this law, anyone who exports or imports restricted, prohibited or banned goods can be jailed for up to three years and fined. Myanmar has no specific law on drones, though travellers have reported facing problems trying to bring them into the country. According to a report by Frontier Myanmar last year, drones have been used in Myanmar for gathering meteorological data, structural checks and traffic control.

Mr Lau and Ms Mok were planning to take pictures of the parliament buildings and pagodas in Naypyitaw when they were spotted by security guards, according to a report in Myanmar government mouthpiece Global New Light of Myanmar.

The Shwedagon Pagoda board of trustees also bans the use of drones above the famous religious site.

Myanmar's foreign affairs ministry has informed the Singapore and Malaysian embassies in Yangon about this case.

Meanwhile, over 20 police officers raided Mr Aung Naing Soe's house in Yangon on Friday evening. According to a report by Reuters, the search lasted two hours and involved immigration as well as special branch police. They seized some memory sticks.