BANGKOK - Singapore’s embassy in Yangon is in touch with the Myanmar authorities over the detention of Singaporean journalist Lau Hon Meng, who is being investigated for using a drone to record images of a parliament building in Naypyitaw.

“The Singapore Embassy in Yangon was notified by the Myanmar Ministry of Foreign Affairs that Mr Lau Hon Meng, a freelance Singaporean photographer contracted by Turkish Radio and Television, was detained by the Myanmar authorities for unauthorised video recording of the Hluttaw building (House of Representatives) by drone on 27 October 2017,” Singapore’s Ministry of Foreign Affairs said in a statement on Monday (Oct 30) in response to media queries.

“Investigations by the Myanmar authorities are ongoing.”

The embassy “will provide the necessary consular assistance to Mr Lau and is closely monitoring developments to ensure that due process is accorded to Mr Lau”, the statement said. “Both the MFA and the embassy are in close contact with Mr Lau’s family.” 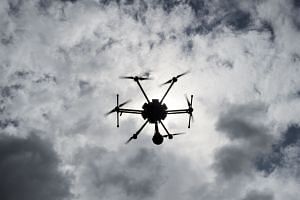 Mr Lau and Malaysian journalist Mok Choy Lin, who was also working for the Turkish state broadcaster, were detained by security guards in Naypyitaw for using a drone. Their interpreter, local journalist Aung Naing Soe, as well as driver Hla Tin, are being held in Pyinmana prison pending investigations.

On Friday (Oct 27) evening, Mr Aung Naing Soe’s home in Yangon was raided by over 20 security officers, who seized some memory sticks.

Malaysia’s foreign ministry has said its embassy in Yangon is monitoring the case closely and will render aid to Ms Mok accordingly.

On Saturday (Oct 28), Naypyitaw policeman Tun Tun Win told The Straits Times: “The foreigners are now still at the Myoma Police Station and the locals are sent to Pyinmana prison. The case has been opened with Section eight of export import law.”

This law penalises people who export or import restricted, prohibited or banned goods, with up to three years’ jail and a fine. Myanmar has no specific law on drones, though its Department of Civil Aviation declared in 2015 that drone pilots needed to register their gadgets.

According to a report by Frontier Myanmar magazine, drones have been used in Myanmar for gathering meteorological data, structural checks and traffic control. Yet individual authorities, like the Shwedagon Pagoda board of trustees, have also attempted to restrict the use of drones on premises under their care.

Police have reportedly said the four people will be held in remand until Nov 10. The case will proceed if they are formally indicted in court.