Republic's role needs to change as China develops, for relationship to stay meaningful

Singapore's relationship with China is in a good state, and China's leaders want the two countries to do more together, said Prime Minister Lee Hsien Loong.

At the same time, the relationship is changing as China develops, and Singapore's role needs to change too for this relationship to stay meaningful, he told reporters as he wrapped up his three-day official visit to China yesterday.

Mr Lee, who met four of the seven members of China's apex Politburo Standing Committee, including President Xi Jinping and Premier Li Keqiang, said the Chinese leaders gave positive assessments of ties and were keen on improving them.

"Bilateral relations are stable - more than stable, they are in a good state," said Mr Lee. "We had some issues to deal with last year, but this year, there have been many exchanges (including) the JCBC (Joint Council for Bilateral Cooperation) meeting in February."

But while joint programmes and projects are progressing on many fronts, such as an agreement to cooperate on judicial and legal matters inked last month, China today is different from when ties began.

"In the old days, China was in a different place. Singapore was able to play a different role because China had not yet opened up, and we were able to help them in this process," said Mr Lee. "Now, they are in a much more developed situation, (with) many more links with all the major players, but Singapore needs to continue to be able to add value to China in order for the relationship to be worthwhile for both sides."

Singapore has an advantage over most other countries through its cultural affinity with China, but it is also necessary sometimes to flag the fact that the Republic has a distinct identity, Mr Lee noted. 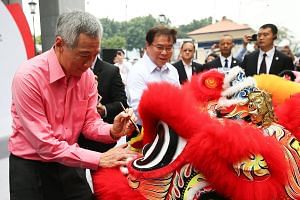 This is one reason why he tries to include non-Chinese ministers or appointment holders on trips to China, he said. "It visibly shows that we are different, but we are friendly."

For bilateral ties to stay durable, relationships also have to be nurtured and cultivated continually, which is why there are younger ministers on this visit, said Mr Lee.

Mr Lee noted that Chinese leaders, too, have devoted energy to building up relationships over the long term. For instance, Mr Xi, who visited Singapore in 2015, was a visitor here as far back as the 1980s, when he was vice-mayor of Xiamen.

But for ties to stay robust, the private sector and individuals also have a role to play, noted Mr Lee, who said he was glad to see many Singaporeans working in China, whether for MNCs or Singapore firms.

He pointed to the example set by 10 Singaporean business people he had lunch with on Wednesday, a diverse bunch including a pig farm operator in Shandong province.

That is the way forward, said Mr Lee - not having a single masterplan, but with individuals and businesses seizing opportunities. "They have become familiar with China, they understand how to work and they see the opportunities," he said. "And I think Singaporeans ought to see those opportunities and take the relationship forward."