KOTA BARU (THE STAR/ASIA NEWS NETWORK) - A second business operator has been slapped with a summons for putting up posters that do not adhere to the Islamic dress code.

This time, it is a businesswoman selling skincare products at Aeon Mall in Kota Bahru.

She told China Press online that she was issued a RM150 (S$50) summons from the Kota Baru Municipal Council (MPKB) on July 26 for posters that featured a woman who was not wearing a tudung (headscarf).

"The enforcement officers just came in and gave me the summon without any warning," she complained, adding that the posters were eventually removed.

On July 25, a watch retailer in the same mall was also fined for displaying two "sexy" posters, supplied by the brand manufacturers, in his shop. 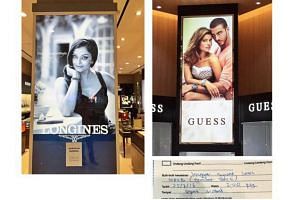 One poster featured Bollywood star Aishwarya Rai and another showed a female model wearing a strapless dress, with her arms interlocked with a man.

MPKB president Zamri Ismail has defended the council's move in issuing the summonses.

He earlier told Sin Chew Daily that outfits which did not abide by the Islamic dress code were deemed "indecent" and that the council did not allow the display of posters with sexy models at public areas.

According to the council's terms of business permits, owners are not allowed to display sexy photographs at their shops.