BANGKOK (REUTERS) - Thailand's Royal Household Bureau has dismissed a top palace official for "extremely evil behaviour", a note on Wednesday (Nov 8) said, in what appears to be the latest shake-up under new King Maha Vajiralongkorn.

The removal of Grand Chamberlain Distorn Vajarodaya, whose role is to manage the royal household, was announced by the palace in a document dated Nov 6, media reported.

The document lists things that Distorn allegedly did including falsifying a 25 million baht (S$1 million) charity receipt for royal honours and tax evasion in the name of the crown.

"The Bureau of the Royal Household deemed Distorn's... acts as disciplinary misconducts considered as extremely evil behaviour deserving of dismissal from the civil service," the royal household bureau said.

A palace official told Reuters on Wednesday that she was unable to comment on the matter. Reuters was unable to reach Distorn for comment.

Distorn's dismissal is the latest sign of the new king's assertiveness and part of an ongoing purge of officials who the palace says did not perform or behave according to their rank.

King Vajiralongkorn, 65, who inherited the throne last year following the death of his father, King Bhumibol Adulyadej, has set about reordering the palace, including the way its finances are managed. 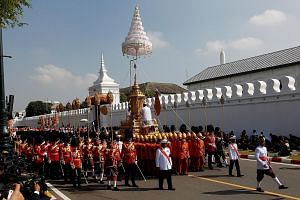 Late King Bhumibol died in October 2016 aged 88 after ruling for seven decades. During his reign, he helped revive the prestige of the monarchy with the help of a powerful palace public relations machine.

He was cremated on Oct 26 after a year of mourning.

The funeral was attended by hundreds of thousands of people who thronged Bangkok's historic area to watch a series of spectacular processions and ancient Buddhist and Hindu rites and say goodbye.

Thailand tries to stay the course in extraordinary times

From Boston to Bangkok, Thais unite in grief over the loss of a father in King Bhumibol

Key milestones in the life of Thailand's King Bhumibol Adulyadej