MANILA (REUTERS) - South-east Asian nations will not take a relative calm in the dispute over the South China Sea for granted, according to a draft of a statement to be issued during a summit meeting in Manila on Monday (Nov 13).

"While the situation is calmer now, we cannot take the current progress for granted," said the draft, a copy of which was seen by Reuters.

The statement will be issued after a meeting later between China and the 10-member Association of South-east Asian Nations (Asean) in the Philippines capital, a diplomatic source said.

"Important that we cooperate to maintain peace, stability, freedom of navigation in and over-flight above the SCS (South China Sea), in accordance with international law," it said.

"It is in our collective interest to avoid miscalculations that could lead to escalation of tensions."

Almost all of the South China Sea, one of the world's busiest waterways, is claimed by China. Taiwan and four Asean nations - Malaysia, Vietnam, the Philippines and Brunei - have competing claims.

Leaders from China, the United States and seven other nations are joining Asean at their annual summit. 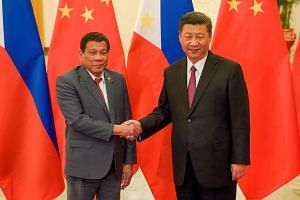 Beijing to work with Asean on peace in South China Sea

On Sunday, Philippine President Rodrigo Duterte suggested that, despite their differences, the leaders should not discuss the South China Sea.

"We have to be friends, the other hotheads would like us to confront China and the rest of the world on so many issues,"Duterte said at a business conference.

"The South China Sea is better left untouched, nobody can afford to go to war. It can ill-afford a violent confrontation."

At the meeting's formal opening on Monday, Duterte made no mention of the South China Sea and pointed to other triggers for a threat of violence in the region.

"Terrorism and violent extremism endanger the peace, stability, and security of our region because these threats know no boundary," he said.

"Piracy and armed robbery in the seas put a dent on our growth and disrupt the stability of both regional and global commerce. The menace of illegal drug trade continues to endanger the very fabric of our society.

"These and other issues are high on the agenda of our meeting."

Duterte has grown closer to China since he took office last year and Vietnam has emerged as Beijing's main challenger in the area. China's move to pressure Vietnam to stop oil drilling in a disputed area in July brought relations between the Communist neighbours to a low.

But on Sunday, Vietnam's state television said Chinese President Xi Jinping had told Vietnam's General Secretary Nguyen Phu Trong he wanted to work with South-east Asian nations on a code of conduct in the sea.

Trump hits it off with Duterte, says Philippines vital for military reasons

Singapore will do all it can to push RCEP negotiations forward as Asean chair: PM Lee

Asean has to stay united and credible, says PM Lee

Asean army shooting meet gets off the mark