The financial troubles surrounding debt-laden state fund 1Malaysia Development Berhad (1MDB) were supposed to fade away quietly before Malaysian Prime Minister Najib Razak called a general election, due by the middle of next year.

But the aborted plan involving the sale of a 60 per cent stake in the country's largest property project, Bandar Malaysia, has put Malaysia's public money woes in the news cycle again.

The upcoming 197ha township at the edge of downtown Kuala Lumpur has an estimated sales value of RM150 billion (S$48.5 billion) and will house the last station for the high-speed rail (HSR) line from Singapore.

But critics question if 1MDB, in its haste to settle its US$11 billion (S$15.4 billion) in borrowings, failed to select the right partners to sell the stake to. The RM7.41 billion deal would have retired some 15 per cent of 1MDB's debts.

Sceptics asked whether the consortium - comprising Malaysia's Iskandar Waterfront Holdings (IWH) and China Railway Engineering Corp (CREC) - had delayed paying the full amount until it could get assurances of being awarded the HSR project. 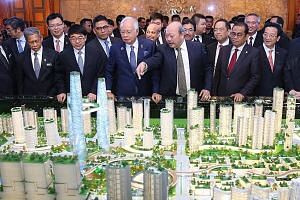 Jitters over China projects with axing of Bandar Malaysia deal

Proposed sale was part of bid to resolve 1MDB debts

For many Malaysians, the fundamental problem was neatly summarised by former premier Mahathir Mohamad: "It is not a national wealth fund. How can you be rich if you borrow money? If you borrow some money from a chettiar (moneylender), would you count yourself rich?"

The speculation followed media reports that the Chinese government had stopped CREC from going ahead with the deal.

Officials at Malaysia's Ministry of Finance, IWH and CREC did not respond to queries yesterday.

TRX City, a unit of the Ministry of Finance (MOF) that was formerly named 1MDB Real Estate, said on Wednesday that it dropped IWH-CREC as the buyer of the 60 per cent stake because the consortium had failed to fulfil its payment obligations despite being given repeated extension periods.

Opposition lawmaker Tony Pua blamed 1MDB president Arul Kanda for the state fund's decision in 2015 to sell the stake to IWH-CREC. "His severe error of judgment, choosing the IWH consortium for the purported 'certainty of transaction execution', has now caused massive losses for the MOF," said Mr Pua yesterday. TRX City, which was to hold a 40 per cent stake after the sale, will now hold 100 per cent of Bandar Malaysia as it seeks a new master developer, instead of another joint partner.

1MDB has inevitably been dragged into this deal since the sale was a major move to reduce the state fund's debts.

The formation of the fund in 2009 was backed by Prime Minister Najib as part of his plan to grow Malaysia's wealth. But it faced critical scrutiny from the beginning. There was concern when it raised funds from the bond market - at high cost - to buy 13 power plants in six countries.

For many Malaysians, the fundamental problem was neatly summarised by former premier Mahathir Mohamad: "It is not a national wealth fund. How can you be rich if you borrow money?"

He said in February 2015: "If you borrow some money from a chettiar (moneylender), would you count yourself rich?"

The controversies turned into multinational probes over alleged fraud when some US$3.5 billion went missing. Today, 1MDB is in talks with Abu Dhabi's wealth fund to resolve the dispute over those missing funds.

And reports emerged that US$680 million in 1MDB money allegedly went into the personal account of Datuk Seri Najib, who is also Finance Minister. He denied any wrongdoing.

The Malaysian government has since sold the power plants for US$2.3 billion to a China company.

But the township and the government can expect fresh scrutiny over their next moves. The decision by Malaysia to retain 100 per cent ownership of Bandar Malaysia is described by opposition lawmaker Rafizi Ramli as "not good risk management".

"Politically, it's more acceptable in this country that the development is in the hands of Malaysian corporations. Naturally, it'll be the government-linked companies (GLCs)," Mr Rafizi said. But he said "there aren't any GLCs that can carry that kind of leverage, with a capacity for capital".